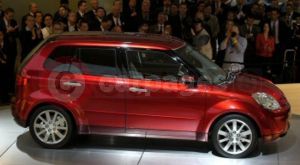 But the Mazda2-based car is also being used to test reaction in the States to small cars. "There’s a lot of discussion about small cars in the USA so we’re going to gather reaction to it here," said Moray Callum, Mazda’s British design chief.

"Mini has proved small cars can be successful and the smaller a car is, the more you can overstate it or caricature it," he said.

Mazda is not hiding the fact that the MX-Micro Sport is based on a production car which will go on sale in Japan later this year. "My challenge has been to make reality look like a concept at times – excite people but not give them a concept that isn’t going to make it.

"The worse thing you can do is to produce a great concept and then do nothing with it," said Callum. One of the challenges is to pitch the concept at the right time between a car that is close to production and one that is far off.

The other challenge, and one faced with designing the MX-5 replacement, was to minimise the compromise between design and practicality. "You have to be realistic about what you can achieve – keep pushing at the boundaries, but not push too far," said Callum.

Now that the Mazda brand has been revitalised with what Callum described as a succession of good launches since the Mazda6 in 2002, the company would start going into different segments. "We need to expand the range and some products will be geographically specific," said Callum.

"There is obviously the potential in North America for non-car vehicles, 4x4s and SUVs, but with limited resources we need to do things differently. The RX-8 is a typical example – it’s a sports car but it’s practical.

"We are not going to be pigeon-holed by segments. In North America we might be seen as a Japanese import company up against Nissan, Toyota and Honda, but in Japan we are equally popular among race car enthusiasts as pick-up truck fans. You need to be a little bit of everything to survive."

Enter the MX-Micro Sport Concept, aimed at giving small cars a different image. "You can’t use the same formula all the time as we go into more and more derivatives," said Callum.

The 2.0-litre four-cylinder, six-speed MX-Micro Sport concept is 3980 mm long, which is 505 mm shorter than the new Mazda3 five-door. 5-Door. At the same time, it is nearly as wide as the Mazda3 and 85 mm taller. This, says Mazda, makes the cabin feel open, spacious, and offers room enough for four adults.