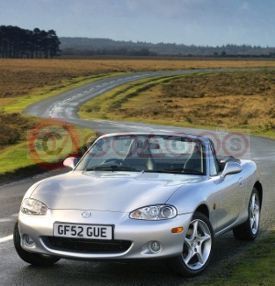 Other impressive increases included Mazda MPV up 480% following a face-lift mid-year and Mazda Premacy up 178%.

Mazda6 was the only addition to the Mazda range during 2002 and was received to widespread acclaim as an excellent all-round car, particularly in driving dynamics, handling, braking and technical innovations. Original forecast for the Mazda6 was 4,500, but early indications during June enabled Mazda Motors UK to increase the sales expectations to 6,000 for the year, finishing the year on 6,308. This forecast has now been increased for 2003 with a sales target of 12,000 for a full year.

The best performer during the year was the Mazda MX-5; already an icon, the MX-5 sold in record numbers during 2002 finishing the year at an all-time high of 7,162, with over 70% of Mazda MX-5 sales to customers new to the Mazda brand. Twelve years on from launch and the Mazda MX-5 is still regarded as the leading roadster in the world. This popularity comes from the classic sports car set up of front engine, two seats, removable soft-top and rear-wheel drive.

The Mazda MX-5 was the car that rekindled the spark of enjoyment for drivers and continues to do so; 2003 will be another record year for the MX-5 as more people discover the affordable and fun motoring to be had from this outstanding roadster.

The Mazda revival has been due to increased advertising, a re-motivated dealer network, moving back into the fleet market and renewed energy from Mazda Motors UK. However, with three new models on the way during 2003, Mazda Motors UK is again looking to increase its market share during the year with an all-time record sales forecast of 39,500.

"Last year was a great result for us and really demonstrated what Mazda could do from a very low base during 2001," commented Phil Waring, Dealer Operations Director.

"We have now successfully re-established Mazda in the UK and are seeing a lot of new customers to the brand. With three new products during 2003 we are expecting many more new customers along with the loyal Mazda customers and we fully expect to see another significant increase in our sales. To assist in the representation of Mazda throughout the country we will also be appointing a number of new dealers to ensure that people who want to buy a Mazda who currently do not have a local dealer will soon have one close to where they live."