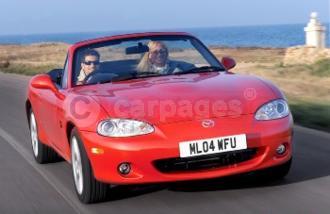 Originally conceived as a car to fill a specific niche in the market, Mazda MX-5 celebrates its global 15th anniversary this year and has now become the best-selling roadster of all time. More than half a million were built during the first 10 years from 1989 to 1999. By the end of 2003, almost 677,000 Mazda MX-5s were making everyday motoring a little more enjoyable for their drivers. In fact, that figure has now reached the production milestone of 700,000 this month.

History of the Mazda MX-5

The first sketch of a Mazda roadster was conceived in 1979. For almost 10 years the project haunted Mazda’s design and development centres in both Japan and the USA. Several concepts were developed then discarded.

Slowly but surely an amazingly clear and straightforward concept emerged: front engine, rear-wheel drive, snappy, short-throw gear shift would accompany the classic two-seater design with a long bonnet, short rear end and manually operated folding cloth top. The concept of a small, lightweight roadster with the codename LWS (lightweight sports car) prevailed and in May 1987 Mazda presented the prototype to a group of select automotive experts for the first time. Their reaction was unanimous: the Mazda MX-5 had the potential to become a best-seller, a big hit.

In March 1989, the Mazda roadster was officially presented to the public in Hiroshima. The car was celebrated as the renaissance of the open-top roadster, which had been declared dead for a decade but was obviously sorely missed. The world agreed then and still agrees 15 years later: Mazda MX-5 delivers all the enjoyment of a classic roadster, not simply to ambitious do-it-yourself petrol heads, but to almost everyone.