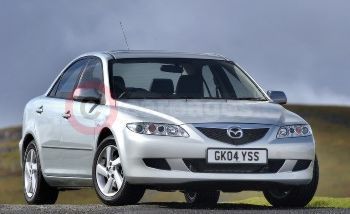 The all-conquering Mazda6, which has taken the company car market by storm since its launch almost two years ago, has been voted the Best User-Chooser Car in the 2004 Fleet World Honours.

The triumph means that the Mazda6 has retained the accolade it won in last year’s awards from the monthly fleet industry magazine and means that the upper medium sector saloon, hatchback and estate have won an incredible 15 national motor industry awards since they entered showrooms in summer 2002. They have also won numerous awards from local and regional newspapers and magazines.

Fleet industry consultant and former IBM Fleet Manager George Emmerson, who was one of the judges, said: ‘Mazda is on the crest of a wave at the moment and its steadily growing reputation is built on a very sound product proposition. The Mazda6 offers the driver an exceptionally high level of specification in a car that both looks good and is rewarding to drive.’

Fleet World editor Ross Durkin commented: ‘I went on the launch of the Mazda6 and it was a memorable event for the great impression that the car had on me. I have no doubt that other drivers will feel the same as me, whether it’s the petrol or diesel versions that they go for. There aren’t too many cars in this sector that really stand out from the crowd, but the Mazda6 is certainly one of them.’

Awards for the Mazda6 last year also included being voted the Best Upper Medium Car in the annual Fleet News awards and already this year the model, which has put Mazda on the fleet map and led its UK sales to an all-time high, has already won the Used Family Car of the Year Award from Auto Express and the accolades of Best Family Saloon and Best Estate Car 2004 from Jeremy Clarkson in his Sunday Times ‘Good Car, Bad Car’ report.

David McGonigle, Mazda’s fleet and remarketing director, said: ‘Fleet industry recognition is fantastic because awards judges are not only taking into account a vehicle’s ride, handling and performance, but, crucially its wholelife costs.

‘For drivers the Mazda6 epitomises the Mazda brand, with sports styling and exhilarating dynamics with practicality and value that’s unrivalled in the upper medium sector.’

Standard equipment includes air conditioning or climate control, front and side airbags and ABS brakes. Prices range from £13,600 to £20,100 and there is a choice of 1.8, 2.0 and 2.3 litre petrol and two 2.0 litre diesel engines.

Since the launch of the Mazda6 Mazda’s sales has been further boosted by the success of the Mazda RX-8, Mazda3 and Mazda2.