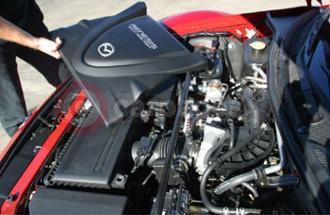 Mazda chiefs are hoping that their RX-8’s RENESIS Rotary can retain its International Engine of the Year Awards crown in 2004. New champions of powerplant excellence are poised, ready to steal the Japanese firm’s glory at the Grand Prize Presentation of the Sixth Annual International Engine of the Year Awards, to be held on 26 May at Engine Expo 2004, the Stuttgart-based exhibition dedicated to powertrain technologies and components.

Decided by a panel of 56 journalists from leading motoring media based in 24 countries including the USA, UK, Canada, South Africa, China, Germany, Japan, Italy and Australia, the International Engine of the Year Awards reward car makers for excellence in the fields of powertrain refinement, performance, technology, fuel economy, and driveability. The judges, all of whom provide their services for free, cast their votes in 12 Awards categories, from Best Sub-1-litre to Above 4-litres, to the Performance Engine of the Year and Best Fuel Economy Engine.

Graham Johnson, Chairman of the International Engine of the Year Awards 2004, commented: "Over 50 new engines have been launched and many existing units have been enhanced or been employed in new applications over the past 12 months. We’ve seen a number of performance-orientated powertrains introduced, and the geographic reach of diesel engines is expanding. Indeed, while the final votes are still being cast, improved fuel economy does appear to be a growing global priority…"

Who makes the best automobile engines in the world? The International Engine of the Year Awards at Engine Expo 2004, Messe Stuttgart, Stuttgart, Germany, on the 26 May 2004 will give the definitive answers.