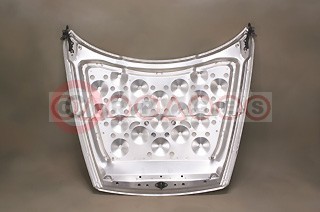 Mazda Motor Corporation has developed a "Shock Cone Aluminum Hood," which has an all-new impact-absorbing structure aimed at enhancing pedestrian protection. Compared to conventional framed aluminum hoods, this new structure has the potential to significantly reduce the severity of head injuries that can result when a pedestrian is struck by a car. The all-new hood will be used on the Mazda RX-8 due to appear in showrooms this spring, and will be gradually incorporated into other Mazda products.

Framed hoods, which are conventionally used for vehicles, have an inner panel with a bone structure to act as reinforcement. For pedestrian protection, safety engineers traditionally control impact absorption by adjusting the way the bone structure crumples. However, the framed inner panel inevitably leaves some hard points that may not fully absorb the forces of an impact.

Instead of a framed structure, the "Shock Cone Aluminum Hood" on the RX-8 has an inner panel that is uniquely shaped with numerous craters, similar to cones. The structure with these craters, called "shock cone," yields effective impact absorption across the entire surface of the hood. This is the first time that this structure has been applied to hoods with the aim of enhancing impact absorption to improve pedestrian protection.

The shock cone structure achieves consistent impact absorption capacity across the entire hood surface. This reduces the extent of head injuries sustained by pedestrians who hit the hood after being struck by a car. In internal tests conducted under European NCAP pedestrian head protection test conditions, the new hood was shown to reduce the degree of head injury by as much as 50 per cent when compared to a conventional aluminum hood structure.

2) Reduced gap between hood and engine

The gap between the hood and engine is designed by taking into account the degree of intrusion into the engine compartment in a collision. The relatively even intrusion level and effective impact-absorbing properties of the new hood structure allowed engineers to reduce the gap between the engine and hood by one-third (approximately 30mm). This configuration, along with the low center of gravity and compact size of the rotary engine, made it possible to employ a low hood design for the RX-8 that complements its athletic, sports car styling.

Whilst automakers have been working very hard to enhance vehicle safety in the event of collisions through the introduction of new technologies, improvements to pedestrian protection are urgently needed. According to a report provided by the Institute for Traffic Accident Research and Data Analysis, around 30% of deaths resulting from traffic accidents are pedestrians, 60% of whom died from fatal head injuries.

In addition to "Shock Cone Aluminum Hood," Mazda plans to develop other technologies that demonstrate the company's commitment to pedestrian safety.