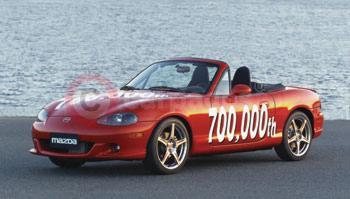 The company that reinvented the roadster extends its record-setting production for lightweight, open two-seater sports cars.

Mazda Motor Corporation marked a significant production milestone on March 5 th as the 700,000th Mazda Roadster rolled off the assembly line at the Ujina1 plant near Mazda’s headquarters in Hiroshima, Japan. Vehicle number 700,000 is powered by the turbocharged 1.8-litre, 178 PS engine and painted Velocity Red Mica, and bound for the U.S. market. This milestone was achieved 14 years and 11 months after the first Mazda Roadster was launched in April 1989 and further extends Mazda’s world record for production volume of a two-seat convertible sports car.

In May 2000, the Mazda Roadster was recognized by the Guinness Book of World Records as the world’s top-selling two-seater roadster with a cumulative production volume of 500,000 units. To mark the new production milestone, Mazda will re-apply with the Guinness organization in an effort to reestablish the record.

Currently in its 15th year of production, the best-selling sports car and Mazda brand icon has become the symbol of driving pleasure in many markets throughout the world. Roadster fans around the globe have established driving clubs in an effort to support their shared enthusiasm for the vehicle. Since launch, the Roadster has captured more than 100 international automotive awards.

The Roadster was developed based on the simple and pure concept of “oneness between car and driver.” With its fun-to-drive, lightweight open-top design and simple, distinctive styling, it is instantly recognizable as a product embodying Mazda’s “Zoom-Zoom” brand philosophy.

The first generation Roadster made its debut in 1989 with the production volume reaching just over 430,000 units during eight years of production. This was followed by the introduction of the current, second-generation model in January 1998. With the continual refinement of its engine and chassis, as well as introduction of various limited-edition models in markets across the globe, the lightweight sports car has continued to meet the high expectations of driving enthusiasts.