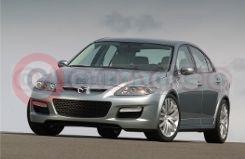 This year has seen a transformation in the fortunes of Mazda in the UK market following the acquisition of the business by Mazda Motors UK Ltd, a wholly owned subsidiary of Mazda Motors Europe, from the UK importer on 1 August 2001.

Next year will see further product introductions with the Mazda2 and Mazda RX-8, both of which will be on the Motor Show stand.

Mazda's new and exciting rotary powered sports car makes its UK debut at Birmingham as a close to final production concept model. The Mazda RX-8 with its freestyle doors is a true four-seat coupe; with between 240 and 250bhp available from its 1.3-litre rotary engine, it promises to be a true driver’s car with the added benefit of being practical for everyday use. The RX-8 will hit the UK showrooms in the summer of 2003 and promises to be a very sought after car.

Fresh from the Paris Motor Show is the production version of the Mazda2, which replaces the Mazda Demio and will be on sale in the UK in March next year. This is the first Mazda to be built in Europe being manufactured in Valencia, Spain. This car promises to be a class leader in handling, steering and braking and will set new standards in the small car market.

Alongside these exciting new cars will be the stunning Mazda6 MPS, a performance concept car based on the Mazda6 hatch, with 280bhp from a turbocharged 2.3-litre engine and four-wheel drive.

The world’s most popular and successful sports car is manufactured by Mazda, the famous Mazda MX-5. Launched in 1989 the Mazda MX-5 was the car that re-invented the affordable sports car and brought the fun of motoring back to everyday motoring.

This car has now sold in excess of 600,000 worldwide and shows no signs of waning in popularity. With sales heading to an all-time record of almost 8,000 this year the Mazda MX-5 is a timeless classic that is much sought after either as new or second hand. On the stand at Birmingham will be two new winter special editions, the MX-5 Montana and the MX-5 Trilogy.

The recently launched Mazda6 has been making headlines as a class leader in the family car market with its outstanding driving dynamics, class leading interior space and innovative Karakuri seat function. Starting at just £13,495 with a range of engines from the responsive 1.8, a 2.0-litre, the range-topping 2.3 and the option of two 2.0-litre common rail diesels coupled to three stunning body styles, this is a car that is set to change the perception of the family car.

The British International Motor Show will also be the first opportunity to see the Mazda6 Sport4 AWD, an estate powered by the responsive 2.3-litre engine coupled to Mazda's activematic transmission and four-wheel drive system.

Also on the Birmingham stand will be the new seven seat Premacy MAV and a 2003 facelift version of Mazda's successful pick-up, the B Series.