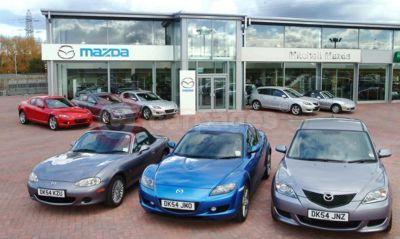 At over 9,200 vehicles sold Mazda Motors UK is the No1 Mazda distributor in Europe for September and celebrates its biggest ever sales month since two plate changes per year were introduced in 2001. Mazda sales are 28 per cent up on September 2003.

September saw the biggest sales month ever for the multi-award winning Mazda6, introduced back in June 2002, at over 3,000 models sold and an impressive 12,500 year to date. The stylish yet functional Mazda3 C-segment car followed at 2,400 for the month – another best ever performance in a month. At just under 8,000 sold since launch in January the Mazda3 is selling 47 per cent ahead of Mazda 323 this time last year.

Mazda RX-8 continues its popularity with over 1,400 sold in September, over 7,700 this year and over 9,400 since its launch in October 2003. In addition, Mazda Motor Corporation has just announced the 100,000th Mazda RX-8 off the production line. Coupled with over 37 international awards the rotary-powered four-door sports car goes from strength to strength.

Sales Director Rob Lindley commented on the September sales success: "We are very proud to announce our highest monthly market share ever in the UK at over two per cent for the very first time. This is due to the continued success of the Mazda6 in both retail and company car sectors, the unfaltering demand for Mazda RX-8 and the growth of Mazda3 sales. I am particularly delighted that many of our Mazda dealers have also celebrated significant sales milestones this month reflecting our national growth.”

"We are well on track to achieve over 48,000 sales this year as one of the fastest growing car brands in the UK market. In order to meet this demand, we will have 150 Mazda dealers operational by the end of 2004, reaching new market areas throughout the country. It's fantastic that our Mazda dealer partners are enjoying the rewards of our sales growth as they have been key to the success that we have achieved in the last three years."