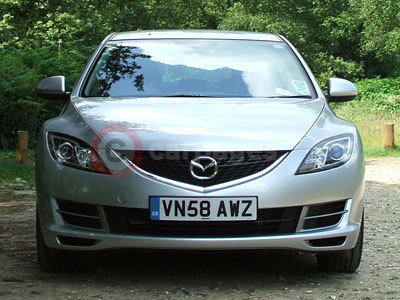 Mazda has recently introduced a new 2.2-litre diesel engine, with a choice of three power outputs, into its range of vehicles. And, with the new power units' inclusion into the Mazda6 range, the company has taken the opportunity to add some extras to the specification.

In January 2009, the Mazda6 range was extended to no less than 26, mix'n'match trim and engine models, including the saloon and estate versions. The new diesel engine in all forms is also added to the hatchback range; Mid- and lower-power units from S-TS2 level and the higher powered engine in the Sport.

The TS2 is likely to be the most popular as this is where the RVMS comes into play. RVMS or Rear Vehicle Monitoring System is one of the new improvements and is standard on all Mazda6 from TS2 and above. The name suggests a parking sensor array but it is, in fact, a driving aid. It is a fully automatic system, comprising wide-angle microwave radar units on either side of the rear bumper. These radars have an effective range of 50 metres on either side of the car but where the system differs from a parking assistant, is that at speeds of 40mph and above, the RVMS starts bouncing microwaves off of following vehicles and motorcycles and illuminates a 'proximity indicator light' at the base of the corresponding A-pillar.

If the driver puts an indicator on prior to changing lanes and there is an obstacle, the light flashes and a beeper sounds, in warning of an impending collision. The system, in various forms is available in vehicles such as the BMW 7-series and the Volkswagen Phaeton, but it is unusual to have it as a standard feature in cars of this price range and will be a welcome addition to private and fleet buyers alike.

But back to the diesel engines; the Mazda6 had a 2.0-litre diesel option before, which produced 140PS and low emissions. The new larger engine is by way of replacement, although the 2.0 is still available in some countries. It offers much the same in terms of fuel consumption and emissions but the three different outputs offer more options to customers.