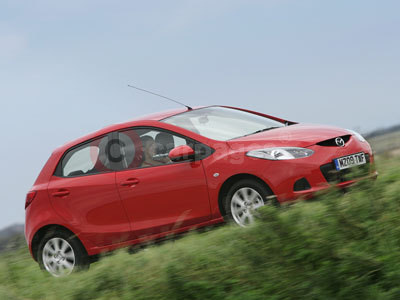 The stylish Mazda2 was the seventh best-selling car in Scotland in April 2009. In February 2009, the outgoing Mazda3 was the sixth best-seller, the first time that Mazda has had a car in the Top 10 best-sellers list in the country.

Mazda is confident that it will do even better in the months ahead with the UK's scrappage scheme now in full swing and the all-new Mazda3 on sale.

Scottish sales of Mazda2 almost doubled to 240 units from 125 in April last year as the car rocketed up the sales charts. In fact, more than one-in-five of all Mazda2s sold in the UK in April 2009 went to buyers in Scotland.

This great performance helped Mazda secure its place as a top 10 marque north of the border with a 4.04 per cent share of the Scottish passenger car market, up from 2.74 per cent in April 2008. Meanwhile, total sales increased to 461 from 384 a year ago for Mazda in Scotland, while the Scottish new car market fell year-on-year by 18.5 per cent.

Mazda has been the 9th best-selling brand in Scotland since February 2009 when it grabbed a record 8.2 per cent market share. It has consolidated its 9th position above Japanese rivals Nissan and ranks just behind Peugeot.

Mazda's share of the Scottish market has traditionally been strong; it closed 2008 with a record market share of 3.63 per cent, up 0.2 per cent on 2007, while market share over the first four months of the year now stands at 3.94 per cent as total sales reached 2,177.

"This was a great performance by our Scottish network and shows that the right products at the right price will sell despite the current difficult economic climate," said Mazda UK managing director Jeremy Thomson.

Alan Smith, Brand Manager at Inverness-based & Dick, which has been selling Mazda cars for 15 years says: "Mazda has a great range now; the quality and reliability are exceptional and the cars are really good value for money.

"We've just had a launch party for Mazda3 which went really well and we already have half-a-dozen customers lined up."