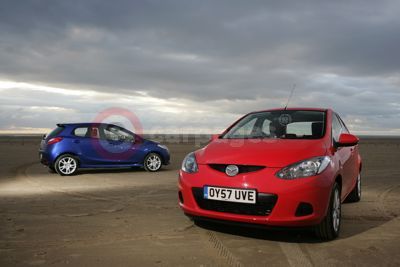 The new Mazda2 helped Mazda to record sales of 9,770 in September. This was Mazda’s best monthly sales performance and the second highest sales month on record.

It also marked the fourth consecutive month of record sales, putting the company well on track to achieve 53,000 sales in 2007 which will be the highest since Mazda started sales in the UK in 1967.

Mazda2 has been “much anticipated and reinforces the Mazda3 and Mazda6 as mainstream offerings,” said sales director Jeremy Thomson.

“It was the right car at the right time. The lightweight strategy with its benefits of improved CO2 emissions and better fuel consumption arrived at a time when other cars in the sector are getting larger and heavier,” commented Mr Thomson. Orders for Mazda2 are also very strong through to 2008, he added.

Best-seller for the month was Mazda3 with 2,778 but overall, the Mazda6 tops the chart with sales so far this year of 11,061 – a tremendous result as the car approaches the launch of an all-new version in December 2007.

The September performance rounded off a remarkable summer. In June, sales were 4,902 giving the company a 2.2 per cent market share. Despite the notoriously wet weather, Mazda MX-5 was the best seller in June with 1,104 sold. In July, Mazda hit 3,608 sales – topped by Mazda6 and in August, sales were 1,755 with Mazda6 again leading the way. Mazda’s share of the August market was 2.3 per cent.

The success in the UK is reflected across Europe where Mazda has recorded its highest September sales volume of 33,680 units, a year-on-year increase of 5.6 per cent, and its highest July-September volume in 16 years, at 75,082 units.