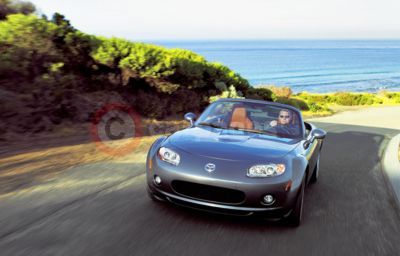 With total sports car sales of 10,153 units in 2005, Mazda has a 13.8 per cent share of the overall sports car and coupe segment of market. And there will be much more to come in 2006, according to Rob Lindley, managing director of Mazda UK.

"We would have sold even more in 2005, but we ran out the old model MX-5 early in September and the new car did not go on sale until November. We also had supply shortages with Mazda RX-8 in the second quarter which impacted on total sports car sales," said Lindley.

He estimates that dealers could have sold 1,000 extra cars if they had them. "We really only hit our full potential in October and November when we took a phenomenal 40 per cent share of the non-premium sports car segment."

Only the Vauxhall Tigra with 5,563 outsold the MX-5, but total Vauxhall sports and coupe sales, including VX220 and Monaro, were 5,936, giving Vauxhall an 8.1 per cent segment share.

Lindley predicts that the sports car and coupe segment will grow this year despite the demise of models like the MGTF and Toyota MR2 (which is being gradually phased out).

What Car? magazine also endorsed the position of Mazda as the UKs favourite sports car company with two awards for the marque this month. "The recent What Car? Awards 2006 were a huge boost and a great recognition for all of us at Mazda with the MX-5 and RX-8 winning the Best Open Top and Best Coupe categories respectively."

"If you add in our newly-launched sports models, Mazda has a really strong, broad-based performance range," said Lindley.

Mazda’s sports car line-up will be given an added boost when TV advertising returns for the Mazda RX-8 in March. "It is still very early in the MX-5 launch period as well, " said Lindley. TV advertising for that model starts in April.

The Mazda sports car range can be experienced at Mazda dealerships around the UK as Mazda MX-5, RX-8 and the Mazda6 MPS models are all on sale now. Mazda is holding a National test drive campaign for the three models at every dealership under the banner "Storm Warning" from 15 to 19 February (inclusive).

The SMMT figures show that in the non-premium sports car section, one-in-four buyers opt for Mazda which has a 25.3 per cent market, ahead of Vauxhall and Hyundai.