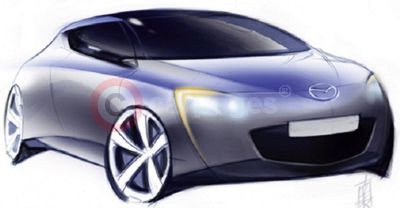 One of the most talked-about vehicles at this year’s Frankfurt Motor Show was the Mazda Sassou concept car, which hinted at where Mazda might be heading with a future B-car. Its conception and realisation by a group of young Mazda designers from five countries under the leadership of Peter Birtwhistle, Chief Designer at Mazda’s European R&D Centre, is a tale of Mazda applied creativity that is just as unique and exciting as the Sassou itself.

Mazda gives an exclusive look behind the scenes at how the Mazda Sassou was brought from paper to concept with original design sketches and previously unpublished photos.

“Sassou had to be a lightweight B-car that would appeal to young, first-time buyers,” said Peter Birtwhistle.

“Parallel to this, the entire team - which included the interior design and the colour and trim teams - brainstormed with our trend team to identify what young people would buy into by way of future technologies. We came up with the 'Mazda Alive' illumination concept and the idea that Sassou would have an interactive, USB stick key and hard disc drive interior. Then each group began design sketches on how these features would look in reality.”

The team also included Masanori Minamisawa, Mazda Assistant Chief Designer now based at Mazda’s European R&D Centre in Oberursel, Germany, whose input was vital throughout the entire design process. The design language depicted in these sketches was successfully transferred to the final concept car at a later date. At this point in development the work of translating these images to reality had just begun.

“After we had confirmed our designs, we then began a phase in which the Mazda Sassou was literally crafted by hand,” said Birtwhistle. “This was the only way to project Mazda’s Zoom-Zoom design DNA through the futuristic exterior design sketches originally proposed.”