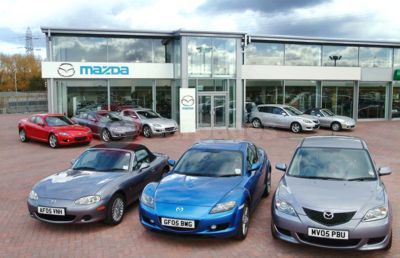 Meanwhile, 12 per cent of total Mazda sales in August were down to Mazda RX-8 sports coupé sales at 158 sold. The continued sales success of Mazda's unique rotary-powered four-door, four-seater sports car has ensured Mazda maintains its position as volume seller in the non-premium S (sports segment) reaching a 15.4 per cent segment share together with Mazda MX-5 sales at 13.1 per cent making a combined 28.5 per cent segment share.

Mazda MX-5 lives up to its title of the world's most popular roadster with continued sales momentum this summer. In August, 157 Mazda MX-5's left the showrooms and at the time of going to press a further 85 have already been sold this month. With only 150 units left these last few models of the second generation model are likely to be snapped up in the next few weeks ahead of the launch of the all-new Mazda MX-5 in November.

Pre-orders of the third generation Mazda MX-5 - priced from £15,600 on-the-road for the entry-level 1.8i model - are going well with over 250 models sold via the pre-order website www.mx5liveit.co.uk already.

August proved a successful first month of sales for Mazda's Compact Multi-Activity Vehicle (MAV) which went on sale on 22 July. Priced from £14,300 to £17,950 for the petrol versions Mazda5 features a regular six-seat layout - with the flexibility of a stowable seventh seat using Mazda's Karakuri seating.

Mazda6 sales reached just over 400 units in August as the last few remaining of the existing first generation model left showrooms, while a number of customers drove away in the eagerly awaited upgrade model.

Also last month, sales for Mazda2 , Mazda's B-segment urban runabout, remained strong for August at 174 units sold while Mazda B-Series pick up saw a dramatic 100 per cent increase in sales compared to last August proving the popularity for the Zoom-Zoom pick up is on the increase.

3 Images may not be UK specification cars. Colours and exterior and/or interior elements may differ from actual models.