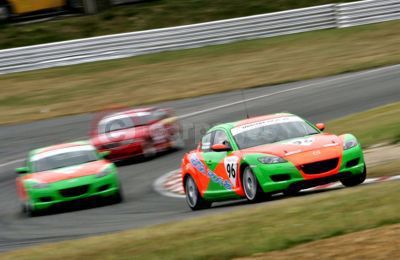 The Mazda endurance race team scored a double victory at Brands Hatch this weekend in the Production S1 Endurance Series underlying the speed, handling and reliability of the Mazda RX-8

The first race held on the Saturday around the Brands Hatch grand prix circuit was a 100 minute endurance race with two cars entered by the Mazda team. Mark Ticehurst and Natasha Firman were behind the wheel of their regular race car while Auto Express motoring writer and veteran race driver Owen Mildenhall was joined by motoring journalist and photographer Gaynor Keating in the media car.

Morning qualifying saw the two cars line up first and second in class on the grid with Mark and Natasha taking pole position by a narrow margin.

Ticehurst and Mildenhall started the race and ran first and second in class until Ticehurst pitted an hour into the race to hand over to Firman having established the fastest lap of the race in class. Staying out for just over an hour Mildenhall took the overall race lead shortly before pitting to hand over to Keating.

Firman showed tremendous race maturity holding off a charging Honda to take the class win and sixth overall in what was probably her best drive of the season. Keating rejoined the race third in class following the pit stop and put in an outstanding performance to hold on to third in class in her first ever race.

Sunday saw the Mazda RX-8 of Mark Ticehurst and Natasha Firman line up on class pole for the second 100 minute race. A faultless drive by both drivers brought them the second class victory of the weekend and seventh place overall including the fastest lap in class.

The Mazda RX-8 endurance racing car is a standard road going car with a few modifications for the race track; these include uprated suspension, slick tyres and a roll cage, the engine and gearbox are unchanged from the road car.

"Another tremendous weekend of racing for the Mazda team," commented Philip Waring, Managing Director, Mazda Motors UK Ltd. "It was a great drive by all four drivers, but especially Gaynor Keating who showed incredible maturity and talent to keep hold of third place in class despite the pressure of her first race on Saturday.

"We have established that the Mazda RX-8 is a race winner in what is almost standard road going configuration. We are proving its outstanding reliability and handling ability and now we are looking forward to the final six race meetings of the year and hopefully more trophies for the cabinet," Waring enthused.