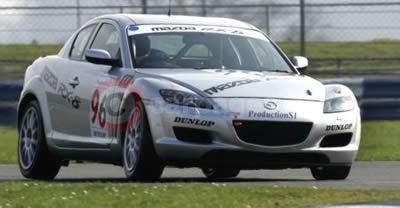 The Mazda RX-8 endurance race team has won the first race of the season in the Production S1 Series driven by Formula Woman Champion Natasha Firman and former race champion Mark Ticehurst. The win came in the first race for the car after two hours of competition today, Saturday 26th March, on the Silverstone International race circuit.

The Mazda RX-8, prepared by Guglielmi Motorsport, qualified second in class in the morning session. Mark Ticehurst contested the first hour stint of the race, running second until the pit stop and driver change, where team strategy put the car back out on the track in the class lead. Natasha Firman kept a cool head under pressure from the second place car and after an exciting second hour of competition crossed the line to win the class and take fifth place overall.

The Mazda RX-8 completed 70 laps of the testing Northampton circuit at an average speed of 77.67mph. The Mazda RX-8 is a standard production car running on slick tyres with some changes to the suspension and the addition of safety equipment - which is required for the race - while the engine and gearbox remain unchanged from the standard car.

The race win with the Mazda RX-8 sports coupé demonstrated Mazda's outstanding reputation for reliability with the RENESIS rotary engine not missing a beat for the entire two hours of competiton.

"This is a great result for the team and for Mazda," commented Graeme Fudge, PR Director for Mazda Motors UK Ltd. "We came to Silverstone today expecting to be competitive, so to walk away with a win in our first race with the car is a true testament to the speed and reliability of the Mazda RX-8.

"Guglielmi Motorsport has worked hard to get the car ready for this race and that hard work has been rewarded with the best result possible. Mark Ticehurst did a great job in the first stint by pulling out distance between him and the third place car.

"Through a clever pit stop strategy the Mazda RX-8 rejoined the race in the lead with Natasha demonstrating a great deal of professionalism by not losing her cool under intense pressure from the second place car to bring the car home in first place."

Mazda RX-8 will race in the next round of the Production S1 Series at Brands Hatch on the 16th April 2005.