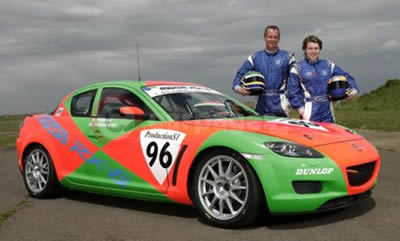 This weekend saw the first overall race win for the Mazda RX-8 team in the Production S1 series of endurance races at Natasha Firman's home circuit of Snetterton in Norfolk.

The car, in its new livery - a copy of the most famous Mazda endurance racing car, the Mazda 787B which won Le Mans in 1991 - ran faultlessly for both the Saturday three hour race and the Sunday 90 minute race resulting in an overall win in the Sunday race.

The double header, held over two days, started with a three hour race on Saturday 21 May with Mark Ticehurst placing the car second on the grid for the start. Changeable weather conditions made the tyre choice difficult and the car was second in class at the one hour point, when Mark handed over to Natasha Firman. Natasha's two hour stint started with torrential rain that caused a number of accidents to hamper the race, resulting in several laps behind the safety car. However, Natasha kept cool under difficult conditions and finally finished the race second in class.

The 90 minute Sunday race saw the Guiglielmi Motorsport-run Mazda RX-8 start the race from its finishing position on the Saturday; second in class and seventh overall.

Natasha started the race and after a well judged drive handed over to Mark Ticehurst with the car running second in class. Mark immediately set about the competition, reeling in the leader by two seconds a lap. He took the class lead with 30 minutes to go and the overall race lead with 20 minutes to go, a lead which he kept until the finish, beating not only their class competitors but also the more powerful cars in the class above.

The only modifications on the race-prepared Mazda RX-8 are suspension to limit roll in the corners, slick tyres and a roll cage, while the engine and gearbox are standard. The Mazda RX-8 is the closest to a production car in the series and it is the outstanding reliability and speed of the rotary engine, coupled to the excellent driving dynamics that makes it such a great endurance racer.

"This is a tremendous result for the team," commented team manager Steve Guiglielmi. "We knew the car was handling well but with the unpredictable weather on Saturday we could not properly exploit the car's performance. We worked hard over the weekend to ensure the car was the best it could be and were rewarded with the fantastic result of first overall on Sunday. The whole team is overjoyed but now we must start work for the next race at Brands Hatch in June."