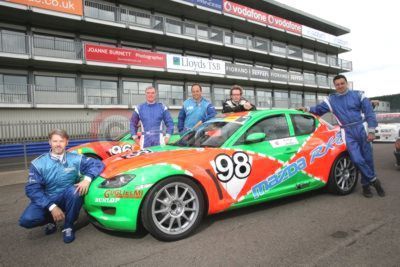 "Reliability is the key to endurance racing and it was the outstanding durability of the Mazda RX-8 and its unique rotary engine that ensured the three production cars ran at race pace for 24 hours, covering a distance of 1,689 miles at last year’s inaugural Silverstone 24 Hour Endurance Race," commented Mazda Motors UK PR Director Graeme Fudge at the media day for the event.

"Last year saw all three Mazda RX-8s complete the round the clock marathon of flat out racing and this year we plan to do the same," enthused Graeme Fudge.

Joining Mark in Car 96 this year is ex-Lotus and Arrows F1 driver Martin Donnelly, Auto Express journalist and racing driver Owen Mildenhall and touring car and sportscar specialist Ian Flux, all of whom drove with Mazda in the 24 hour race last year.

The third car - sponsored by the Financial Times - will be headed by experienced endurance racer and the FT’s motoring editor John Griffiths along with the same team from last year Rachel Green, Richard Chamberlain and Andy Shephard.

All three Mazda RX-8 race cars are entered by Mazda Motors UK/Guglielmi Motorsport led by Team Manager Steve Guglielmi who commented: "The cars which will be used in the 24 Hour Britcar Endurance Race are based on the standard, road-going Mazda RX-8 sports coupés. The seats and many interior panels have been removed, and each car has undergone a number of essential safety modifications - including the addition of a roll-cage, fire extinguisher, race seat and some suspension alterations necessary for racing.

"The revolutionary 1.3-litre, 231ps RENESIS rotary engine is standard, the only slight modification we have made is to fit a racing gearbox."

The 2006 24 Hour Britcars Endurance Race marks the Mazda RX-8’s third 24 hour event which started back in October 2004 when Mazda set a total of 40 international records with two Mazda RX-8s during a 24-hour record attempt on the 12.3km oval at the automotive proving grounds in Papenburg, Germany. The two 231ps Mazda RX-8s drove more than 5,000 kms during the 24-hour record attempt with average speeds of 212 and 215km/h.

Mazda is currently Britain’s Favourite Sports Car Brand with nearly 1 in every 5 sports cars sold in Britain being either a Mazda MX-5 roadster or Mazda RX-8 sports coupé.

Managing Director Rob Lindley commented: "We are on track to break a record this year in terms of sales volume. We are on track to sell around 50,000 cars in the UK in 2006. So far this year our sales are 9 per cent up on last year and considering the market is around 5 per cent down we are pretty happy to achieve that."