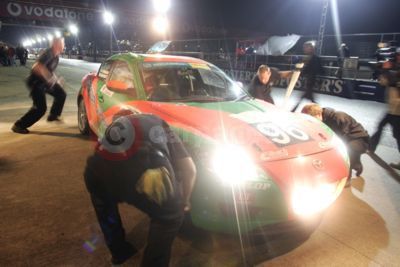 This weekend's inaugural Silverstone 24 Hour Endurance Race saw all three Mazda RX-8s complete the round the clock marathon of flat out racing.

Reliability is the key to endurance racing and it was the outstanding durability of the Mazda RX-8 and its unique rotary engine that ensured the three production cars could run at race pace for 24 hours, covering a distance of 1,689 miles.

Martin Donnelly placed the Mazda RX-8 on pole position for the race and Mark Ticehurst led the class in the first stint. Fifty five cars started the race at 5pm on Saturday with 15 cars in the Mazda class. The Mazda RX-8s contested the production class with five race car classes above them.

During the night, the order changed and the Wilds/Flux/Frankel/Pye car led the Mazda trio. They held this position to the chequered flag at 5pm on Sunday to take second in class and 17th place overall, after completing 529 laps of the 3.194 mile circuit and an impressive distance of 1,689 miles.

From 55 starters 40 lasted the 24 hours, nine of which were in the Mazda class. The winner was a purpose-built endurance race car which completed 603 laps, a distance of 1,925 miles and an average speed just 10 miles an hour faster than the Mazda RX-8.

The three Mazda RX-8s were essentially production cars with only the suspension changed to account for the slick tyres and safety equipment fitted to conform to RACMSA, (Royal Automobile Club Motor Sports Association), race rules. The rotary engine and gearbox are standard and the same as found on the road-going version.

"Endurance racing is the ultimate test of reliability for a production car," commented Rob Lindley, managing director for Mazda Motors UK. "The Mazda RX-8s contesting the Silverstone 24-hour race were the closest to production specification of all the cars in the race. Apart from safety equipment and a few suspension modifications these were production cars."