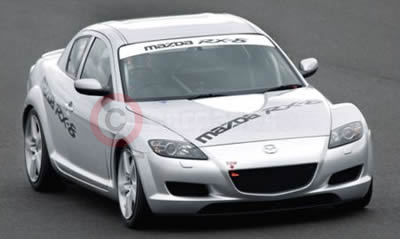 The Mazda RX-8 race car, entered by Mazda Motors UK/Guglielmi Motorsport, will make its debut at Silverstone on 26 March. A second Mazda RX-8, to be driven by journalists, will be entered in selected races.

Following the growth in popularity of the Britcar series in recent years the organisers, the European Endurance Racing Club (EERC), decided to create the Production S1 category for production-based saloon and GT cars of up to 3-litres engine capacity for the 2005 season.

Commenting on the announcement, Jeremy Thomson, Mazda Marketing Director said: “Last year we proved the speed and reliability of the RX-8 when we set 40 international records. This year we want to demonstrate that speed and reliability in the more testing environment of endurance racing.”

The cars used in the Production S1 series are based on the standard, road going Mazda RX-8 sports coupés. The seats and many interior panels have been removed, and each car has undergone a number of essential safety modifications - including the addition of a roll-cage, fire extinguisher, race seat and some suspension alterations necessary for racing. The revolutionary 1.3-litre, 231 ps RENESIS rotary engine and gearbox are standard.