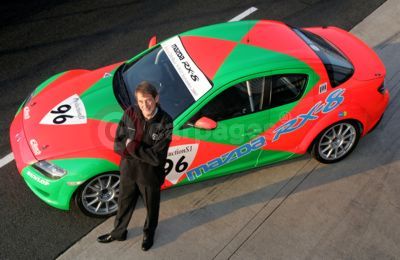 Mazda will be entering two Mazda RX-8s in the September 24-hour endurance race at Silverstone. Both cars will carry the livery reminiscent of the rotary powered Mazda 787B that won the Le Mans 24-hour race in 1991 and will have one of the strongest driver line-ups on the grid.

The race will take place on the Silverstone GP circuit on 10 and 11 September as part of the Production S1 Endurance Series. Starting at 4pm on Saturday the cars race around the clock finishing at 4pm on Sunday. Over the 24 hours the two Mazda RX-8s are expected to cover more than 2,000 miles, around 600 laps of the 3.94 mile circuit.

Both Mazda RX-8s are standard production cars with uprated suspension to allow for cornering forces, slick tyres and standard race safety equipment. The engine and gearbox are the same as the road going version and have not been modified. In this standard trim the Mazda RX-8 set 40 FIA records over a 24-hour period in Papenburg, Germany, last year at an average speed of 132 miles an hour.

The team is confident of success at Silverstone with the strong driver line-up and is looking forward to 24 hours of challenging racing.

"We know the Mazda RX-8 is capable of running faultlessly for 24 hours," commented Natasha Firman. "We proved that in Papenburg last year, we now have to translate that speed and durability into race success here at Silverstone."

"We have had a 100% reliability record this year over eight endurance races. The Mazda RX-8 really is a great car in standard form, it is reliable and extremely good on the track, the only unknown is how Mark and I will adapt to 24-hour racing but we are both fit and really looking forward to the challenge. The team is incredibly strong with some outstanding drivers so we are very confident of a good result, we just have to stay out of trouble as it will be very busy out there with over 70 entrants."