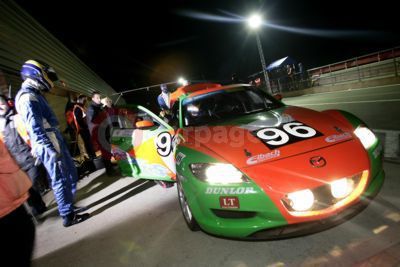 The Mazda RX-8 race team has finished the season as they started - with a win. The final race of the season was held at the Norfolk circuit of Snetterton where Mark Ticehurst and Natasha Firman took pole position and led the 2.5 hour night race from start to finish. The handling and reliability of the Mazda RX-8 gave them the class win and fourth overall from the 26 strong starting grid along with the fastest lap for the class.

The race included the more powerful GTC and GTR cars with the Mazda RX-8 placed in the lowest category for production cars. Despite being virtually showroom specification the Mazda RX-8 was lapping just two miles per hour slower than the overall winner, a Porsche 911 GT3 Cup car, an extraordinary achievement for a car with standard engine and gearbox.

The Mazda RX-8 race car is very close to production specification with just suspension changes, slick tyres, roll cage and safety features for racing; the engine and gearbox are standard production and have proven hugely reliable over the season. Mark and Natasha completed 10 endurance races over the season with six class wins, one overall win, three second in class and one fifth in class. The media car contested four races with both experienced and novice drivers; from four races the car finished second in class once, third in class twice and fourth in class once.

"We could not have asked for a better end to the season," commented Graeme Fudge, Mazda Motors UK PR Director. "The team has achieved tremendous results all season proving the speed, reliability and handling of the production specification Mazda RX-8 against cars specifically built for racing. The Snetterton race was an outstanding result, we were up against some serious race cars, including Porsche 911 GT3, Ferrari 360, Lotus Exige, Marcos, TVRs and BMW M3s; the Mazda RX-8 was not only lapping consistently with the more powerful race cars but finished the race fourth overall and a class win, a great job by Mark and Natasha and testament to the hard work and dedication of the race team."