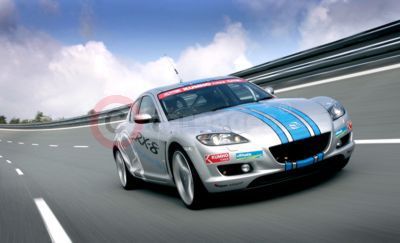 The FIA (Federation Internationale de l’Automobile) has announced that Mazda RX-8’s attempt to set 40 international speed and endurance records at Papenburg, Germany last October has been confirmed. These records can now be added to the list of 37 Mazda RX-8 international vehicle awards and nine RENESIS rotary engine accolades that include four International Engine of the Year awards in 2003 and 2004.

The records were set during a 24-hour period on the 12.3 km oval at the automotive proving grounds in Papenburg with two 231ps Mazda RX-8s. 20 records were set in the FIA Category A (Special Vehicles) and 20 in the FIA Category B (Mass Production Vehicles). The two sports cars covered more than 5,000 km during the attempt and were driven by 15 automotive journalists from 11 countries (see attachment) including Formula Woman Champion Natasha Firman and UK media drivers John Griffiths and Chris Harris.

The attempt was made under the watchful eyes of the German Motor Sports Organisation DMSB e.V., which ensured all mandatory FIA regulations were adhered to during the attempt. This included selecting at random three production Mazda RX-8s in Antwerp, Belgium and sealing their engines and transmissions on-site for the Category B attempt vehicle. The Mazda RX-8 used in the record attempt in Category A was a model used in the 2004 Formula Woman Championship in the UK.

Mazda RX-8’s record performance is the latest in a long Mazda tradition of 24-hour endurance races and further proof of how Mazda continues to build upon this tradition by delivering Zoom-Zoom driving fun in all its production vehicles. The two Mazda RX-8s with 231ps RENESIS rotary engines averaged 212.835 and 215.934 km/h respectively over the 24-hour endurance trial. Both shattered a record previously held by the Mazda 787B race car with a 700ps rotary engine that won the 24 Hours of Le Mans averaging 205.133 km/h in 1991.

In the UK, the Mazda RX-8 has continued to prove its endurance capabilities with 100 per cent finishes in the eight races so far in the S1 Production Series Britcars season, including the inaugural 24-hour, 1,500 mile endurance race at Silverstone last month when three race-prepared Mazda RX-8s completed the whole race.