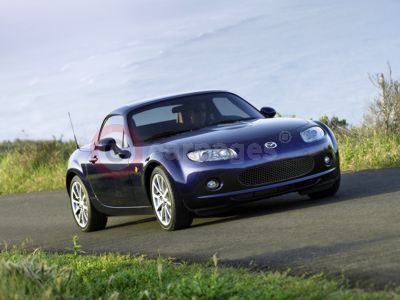 Although 17 years old, the Mazda MX-5 is already an absolute classic. An object of cult-like adoration, it has enjoyed unbroken popularity since launch in 1989. At the Geneva Motor Show last year, Mazda introduced the third generation of the Mazda MX-5 that followed in the footsteps of two predecessors, whose success surprised even the most optimistic forecasters. Since 2000, Mazda MX-5 has been in the Guinness Book of World Records as the most successful open, two-seater vehicle ever. Since that date, the publisher has kept adjusting the sales figures upward with each new edition of the book. At the end of June 2006, the number stood at 774,372 units produced worldwide and demand for the current version of the cult roadster remains high in Europe, North America and Japan. The number of prizes and awards Mazda’s roadster has won around the world is equally as impressive - over 150 to date.

The Mazda MX-5 concept - with a north-south engine placement, 50:50 weight distribution, classic two-seater design with long bonnet and short rear end, along with a manually retractable soft top - is just as alluring now as it was in 1989. The third-generation MX-5 is even more fun to drive, with improved Jinba Ittai handling attributes. Yabusame is the name of a Japanese ritual, in which a warrior shoots an arrow into a target while riding a horse. Only when horse and rider are in perfect harmony can the arrow hit the bull’s-eye. Mazda MX-5 delivers a similar symbiosis between driver and machine, an exhilarating oneness with the roadster that precludes the need for a V6 engine and 200 PS of power.

During the last few years, several coupes have been launched in Europe with electric retractable roofs. This trend has led to an increase in demand among potential Mazda customers for an MX-5 version with a retractable hard top. Many of these people have never owned an MX-5 but find the idea of open- top roadster fun, combined with the added comfort a hard top offers, very attractive.