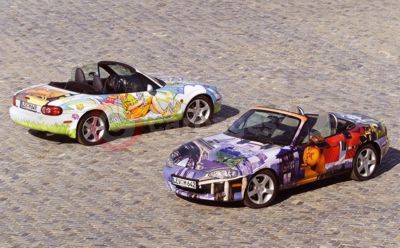 Only 16 years old and already a classic, with a cult following as well, Mazda MX-5 is a unique phenomenon. In October 2005, the third generation of the best-selling Mazda MX-5 will hit showrooms throughout the UK. It follows in the footsteps of two previous versions, whose success surpassed even the most optimistic predictions.

Since 2000, the successor to the classic British roadsters of the 1960s has been in the Guinness Book of World Records as the best-selling two-seater sports car of all time. A total of 531,890 units built between April 1989 and October 1999 make the Mazda MX-5 the most successful open-top, two-seat sports car in history.

News of the Mazda Miata introduction at Chicago in 1989 hit the motoring world like a bombshell. Originally meant for the USA and Japan, excitement was so great that it literally washed over the Atlantic to Europe and Mazda was not able to supply enough vehicles from Japan to meet global demand.

Desperate to have the car, European MX-5 fanatics came up with the idea of importing versions on their own to Europe. To this day, these models can be identified by the Miata logo on their rear ends - an emblem that seems like a membership to a secret society.

While the Mazda MX-5 was a magnet for sports car lovers for years in the USA and Japan, popularity for the car has shifted permanently to Europe during the last three years. Here a good 80 per cent of all MX-5s have found new owners in sun-starved England and Germany. Between 1989 and June 2005, 67,079 Mazda MX-5s were delivered to England while 83,783 were registered in Germany during the same period.