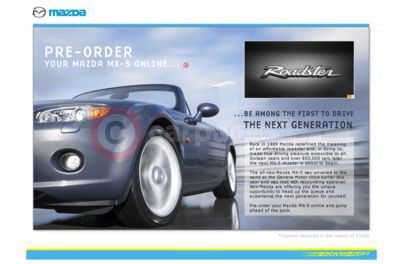 Mazda Motors UK is launching a major cross-media campaign to convert interest in the next generation of its Mazda MX-5 two-seater roadster into sales, with the launch of a pre-order microsite. www.mx5liveit.co.uk goes live on 1 August 2005, building momentum for the on-sale date in November.

The general public will be able to pre-order an MX-5 with engine, specification and colour choice from the five-model range by visiting the site, which was designed by interactive agency Syzygy. An online advertising campaign running on automotive, lifestyle and news and sport sites will promote the microsite and a combined TV, cinema and viral campaign will be launched in 2006.

The third generation of the eagerly-anticipated Mazda MX-5 was unveiled at the Geneva Motor Show in March 2005 to widespread acclaim. Three hundred of the all-new Mazda MX-5 Limited Edition 2.0-litre model in striking red with chrome detailing were first made available for MX-5 UK Owners Club members to pre-order in July 2005 priced at £19,995 on-the-road.

Other countries have the option to use similar pre-order systems. The microsite platform can be customised to support the needs of other markets and incorporate a payment facility if required.

Jeremy Thomson, marketing director at Mazda Motors UK said: "As a challenger brand we know the strategy of viral, online and TV combined works for us and pre-order has been deployed very successfully to build anticipation for previous launches."

"In 2003, the pre-order facility for the rotary-powered Mazda RX-8 sports coupé microsite took 1,777 orders, more than 75 per cent above target. In 2004, Mazda RX-8 became Britain's most popular sports car, and the online strategy was a key factor in its success. We have fine-tuned this industry-leading marketing formula to ensure a comparably successful pre-order site for the all-new Mazda MX-5."

Gareth Phillips, managing director at interactive agency Syzygy UK said: "Automotive brands are increasingly placing interactive media at the centre of their marketing efforts - online is particularly suited to Mazda’s pre-order strategy. The demonstrable success of the Mazda RX-8 campaign justifies the confidence Mazda exhibits in this channel and we anticipate that it will contribute significantly to the launch of the all-new Mazda MX-5."