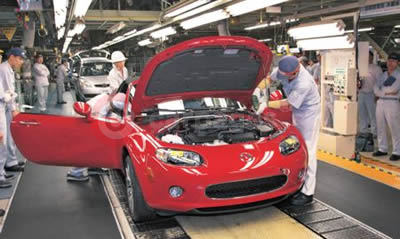 Mazda Motor Corporation today announced production of the all-new, third-generation Mazda MX-5 – the latest and most advanced evolution of the world's best-selling roadster - started on 17 May at the Ujina No.1 (U1) plant located near Mazda's global headquarters in Hiroshima, Japan.

The Mazda MX-5 is the first new model to be mass-produced at Mazda's U1 plant. The first Mazda MX-5 off the line was a third generation limited edition model bound for North America. The limited edition Mazda MX-5, painted velocity red with a red leather interior, is fitted with a 16-valve, 2.0-litre four-cylinder engine and six-speed manual gearbox.

"A new car launch is always a critical and exciting event for any car company and the launch of a brand icon like the MX-5 is particularly special. This is a great moment for all Mazda employees and a great day for car enthusiasts around the world," commented Hisakazu Imaki, president and CEO of Mazda Motor Corporation.

The all-new Mazda MX-5 is already one of the hottest cars of 2005. It was first shown to the public in March at the Geneva Motor Show and has since been featured prominently around the world, at key shows in cities such as Melbourne, Shanghai and New York.

In April 2005, the Guinness World Book of Records officially recertified the Mazda MX-5 as the best-selling two-seat sports car ever. When production of the second-generation model came to an end in December 2004, a total of 718,954 vehicles had been built. The new Mazda MX-5 hits UK showrooms in November.