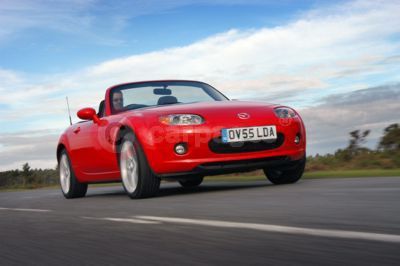 Scooping the first award for 2006 is the iconic new Mazda MX-5 winning the 'Best Roadster 2006' award from Test Drive magazine, announced in its February issue out now.

Open-top motoring has always been synonymous with British sports car fans whatever the weather, as Test Drive magazine discovered when they drove the new Mazda MX-5: "It wasn’t exactly the stuff of Californian dreams the day we got our hands on the new Mazda MX-5. The clouds were moving fast and angry over the Welsh hills and the wind was biffing whatever debris it could find about the car park. Yet there was a freshness to the morning, a sense of nature that is lost the moment you close the door of a steel-roofed car."

Test Drive also liked the evolution of the all-new Mazda MX-5 that sticks to the true feeling of the original model: "The MX-5’s manual hood can be lowered in seconds. Simplicity is the watchword. The temptation to tweak, to tamper, to temper and to tame has been resisted.

"This car can trace more than its name back to the first model in 1989; its purity and its simplicity remain intact. So drop the hood. Don’t worry about the rain when it comes. If it can’t catch you, it can’t soak you. Go fast enough and the wind will be your roof."

"The Mazda didn’t just win on a value-for-money footing. It won on the twisting, rain-soaked mountain roads. It won on the mile straight of the proving ground. It won on the fast, sweeping corners of the Rockingham racing circuit.

"The Mazda is quicker than the BMW, its steering is sharper and its six-speed gearbox sweeter. But you don’t need a satellite-linked data recorder to tell you all that. The grin on your face will do just fine. Downgrade to the slower, five-speed 1.8-litre version and the experience may be a little less intense, but the smile will still be there."

The world's most popular roadster has scooped two prestigious awards just two months after officially hitting Mazda showrooms throughout the UK following the Top Gear Roadster of the Year 2005 award in December. Over 1,000 sports car fans rushed out to become the first proud owners of a new Mazda MX-5 in the two months of sales at the end of 2005.

Mark Cameron, marketing director for Mazda commented on the appeal of the new Mazda MX-5: "The masculine styling with flared wheel arches, larger cabin size and increased engine size of 2.0-litre with 160 horsepower gives a more aggressive stance and expresses the evolution in design of the iconic Mazda MX-5."

Test Drive Editor James Mills concluded: "We’re happy that Mazda left things pretty much the way they were. It’s a little more civilised, but the MX-5 remains a real roadster, a dream car you can actually afford."