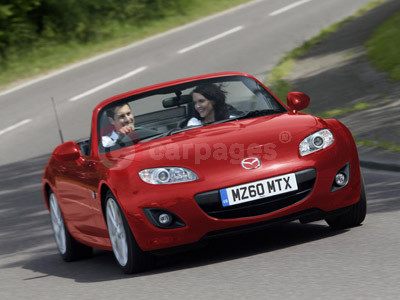 Mazda has launched one of the UK's first social network ecommerce opportunities in the UK through its participation in the launch of Facebook Deals and points to the future of social media and retailing.

Mazda is offering a 20 per cent discount on all Mazda MX-5s and the chance to win a Mazda MX-5 Miyako special edition for five months through Facebook Deals, part of Facebook Places.

Mazda is one of the launch brands offering discounts through Facebook Deals for customers who 'check-in' at locations around the UK.

To be eligible for the 20 per cent discount on a Mazda MX-5 the customer checks-in on Facebook at one of the five Mazda dealerships via the most recent version of the Facebook app or your Smartphone, 'claims the deal' and presents their deal voucher, via their mobile phone, to the salesperson. The same check-in process applies for the competition, but then the customer must enter their details into the data pod in the dealership. The five competition winners will be drawn at random at the end of the competition period.

"Social media has always been about communicating to as wide a range of people as you want, but until now has not given any commercial benefits to consumers," commented Claire Andrews, Marketing Director, Mazda UK.

"Facebook Deals recognises the consumer's appetite for a deal and brings a real financial benefit to social media use. Just by being one of Facebook's 26 million UK users you are suddenly entitled to some fantastic offers and 20 per cent off Mazda's iconic sports car, a deal you cannot get anywhere else,"

Andrews concluded: "This demonstrates the power and future for retailing and social media, bringing greater benefit and functionality to Facebook and a great deal for those with a Facebook account."

Finding deals near you is easy. Using your mobile browser or the latest version of the Facebook app, open "Places" and then click "Check In." A list of Nearby Places will appear and a yellow ticket will show next to Places that are offering deals.