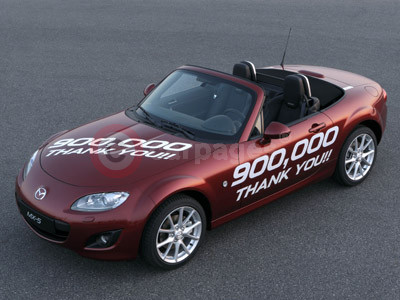 The Mazda MX-5 was initially certified by Guinness World Records as the world's "Best selling two-seater sports car" when production reached 531,890 units in May 2000. Guinness updated the record when production passed 700,000 and 800,000 units, respectively. Currently Mazda is reapplying to Guinness World Records to have the record updated to 900,000 units.

During the 1960s and 1970s, numerous lightweight and fun-to-drive sports cars offered nimble handling and free-spirited open-air motoring. In the 1980s, Mazda decided to resurrect this spirit with a new roadster for the modern age. Using the latest engineering techniques, Mazda developed the MX-5 and introduced it in February 1989 as a reminder that driving could still be fun despite ever-stricter safety and quality standards. To this day, the Mazda MX-5 remains the longest-running nameplate in Mazda's global lineup.

Nobuhiro Yamamoto, programme manager of the current Mazda MX-5, said, "Since Mazda launched the original MX-5, it has undergone two complete product redesigns and a series of upgrades. Its enduring success is due to the strong support it enjoys from MX-5 fans around the world. Going forward, I will strive to keep the MX-5's spirit alive while evolving it into a car that will be loved by even more people."

Mazda's senior managing executive officer in charge of development, Seita Kanai, said, "More than 20 years have passed since the first-generation Mazda MX-5 was born. During this time, society and vehicles themselves have changed significantly. Responding to environmental issues and the depletion of the Earth's natural resources has become increasingly important for all automakers. As part of its environmental efforts, Mazda announced its new SKYACTIV technologies last year. Currently, we are pushing forward with the development of future products that will incorporate these technologies. Many of the elements that go into our SKYACTIV technologies, such as comprehensive weight reduction, are based on the long years of development work that have gone into the MX-5. Indeed, the guiding principle behind the SKYACTIV technologies - to build cars that are fun to drive - is perfectly embodied by the MX-5."

"As we head toward the next production milestone of one million units," Kanai continued, "Mazda is committed to further evolving the MX-5. We will refine its fun-to-drive character and further enhance its environmental and safety capabilities. As Mazda passes its 91st birthday, we are turning our sights toward our 100th anniversary. In the years ahead, alongside its loyal fan base, we will continue to cherish the MX-5 as a symbol of the Mazda brand."