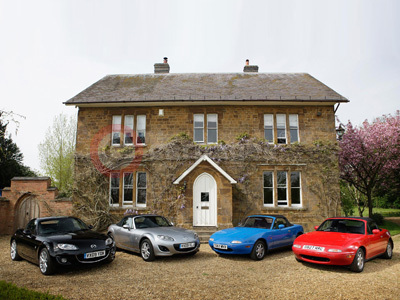 Twenty years since it first arrived in the UK, the Mazda MX-5 has achieved another significant milestone with sales of the iconic sports car hitting 100,000 units.

Attributes that include wind in the hair motoring, the joy of driving, outstanding handling, affordability and unadulterated fun, have encouraged 100,000 British motorists to buy a Mazda MX-5 over the last two decades. Despite the climate the Mazda MX-5 has proven to be the UK's most popular sportscar, with British motorists accounting for over 10 per cent of global sales and 40 per cent of European sales since the MX-5's introduction in 1990.

When Mazda unveiled the Mazda MX-5 at the 1989 Chicago Motor Show, it single-handedly resuscitated the small and affordable roadster market. Arriving when a huge motoring audience was crying out for the return of fun, and affordable roof-down driving, the perfectly proportioned roadster was brilliantly conceived and engineered to deliver undiluted driving pleasure. It was an instant hit, its record-breaking sales success underline the Mazda MX-5's global appeal.

Today, its core design has remained untouched for three generations, the chassis retains its classic front engine, rear wheel-drive layout and its 50/50 weight distribution ensures that drivers feel at-one-with-the-car when driving at any speed.

The car was an instant sales success here in the UK - arriving in mid March 1990, it racked up 2,246 sales by the end of its first year. It combined affordability, outstanding reliability, and residual value performance with an unprecedented degree of driver engagement, ensuring that the love affair with the Mazda MX-5 was destined to be an enduring relationship. It was as much a joy to drive as it was to own, creating a vast and loyal band of owners who relished its ability to turn every journey into a special event.

While the Mazda MX-5 enjoyed success in the UK it was also well received across the globe. It entered in the Guinness Book of World Records in 2000 as the best-selling two-seater sportscar in history and racked up over 178 awards with more than 880,000 sales across two decades. Fifty eight of those awards were won by the current third generation Mazda MX-5 including Japan Car of the Year 2005-2006 and Top Gear Magazine's Roadster of the Year 2006.

In the UK, Mazda MX-5 earned the title of 'Best Sports Car' in its class in the 2010 JD Power vehicle ownership satisfaction survey and has won the 'Best Roadster' title for the fifth time-in-a-row at the 2010 Auto Express New Car Awards.

For over 20 years the Mazda MX-5 has embraced the true British sportscar heritage following on from the classic roadsters produced by domestic brands from the 50's and 60's. With 37 special editions alongside the impressive range, the Mazda MX-5 enjoys consistent sales success in the UK with almost 40 per cent of European sales coming from British motorists. Annual UK sales hit an all time high in 2007 with 9,234 sold, going on to culminate in the 100,000th sale to Dr Helen Jones recently.