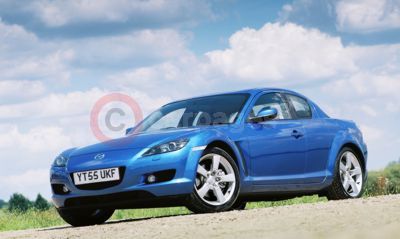 Triple triumph goes to Mazda RX-8, Mazda3 and Mazda2 for their second highest month of sales since introduction at 1,400, 3,400 and 800 respectively. Meanwhile pick-up sales were the highest ever for Mazda B-Series at 214 - beating the Toyota Hilux by 22 per cent.

Mazda RX-8's share of the September sport car segment (non premium) continues to be strong at 23.9 per cent compared to 17.6 per cent for full year 2004. In fact, sales of Mazda's award winning rotary-engined sports car were 79 per cent above Audi TT.

Also in September, Mazda RX-8 received official confirmation of its 40 FIA (Federation Internationale de l’Automobile) records set at a 24 hour endurance event in Papenburg Germany last October. These records can now be added to the list of 37 Mazda RX-8 international vehicle awards and nine RENESIS rotary engine accolades that include four International Engine of the Year awards in 2003 and 2004.

Ahead of the official launch in November, preorder sales of the all-new Mazda MX-5 are notching up already with only a few of the special launch edition model - available with 2.0-litre 160ps engine and striking Velocity Red - left to order from the preorder website www.mx5liveit.co.uk

Priced from £15,600 on-the-road for the entry-level 1.8i model - just £500 more than the outgoing model - Mazda Dealer showrooms are expected to be buzzing in October and November as the first display and demonstrator models of Mazda's new roadster reach the UK and the national advertising campaign goes live.

Within a month of going on sale in the UK Mazda's Compact Multi-Activity Vehicle (MAV) Mazda5 received the 4x4 and MPV Driver magazine award for MPV of the year proving the Mazda5 is already providing a fresh alternative to the increasing C-MAV segment. Priced from £14,300 to £17,950 for the petrol versions Mazda5 features a regular six-seat layout - with the flexibility of a stowable seventh seat using Mazda's Karakuri seating.

5 Images may not be UK specification cars. Colours and exterior and/or interior elements may differ from actual models.