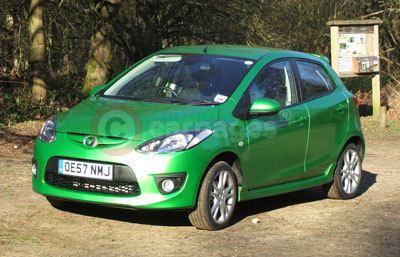 The new Mazda2 may be the second model to bear the name but it is the first in a new generation of Mazda cars, so we are told.

And new it is. The designers brief stated that, ‘no variations of the predecessor model were permitted’. So, starting with a blank sheet of paper, they came up with a smaller car than before, which is a rather unusual move but definitely not a retrograde step.

Born out of the Demio (it is still called that in some countries), the new Mazda2 leaves the staid and mundane image of that car far behind. The first Mazda2 went some way towards the change in attitude with a variation in style but the new one is completely different in an effort to appeal to younger buyers.

This desire to attract a new generation manifests itself in the current TV advertising campaign, carrying the slogan, ‘It’s fit’. For sure it is and the new range of bright colours, such as the Spirited Green Metallic, featured in the advertisement (and the test car) will go a long way to achieving Mazda’s wishes.

However, colour is no good without style and with around 50 different cars on offer in the ever-growing, B-segment; the Mazda2 will need to stand out. With this in mind, the designers have come up with a distinctive wedge shape with a design line emphasising the point, as it runs from behind the front wheel arches to the top of the rear light cluster. At the base of the doors, a stronger, so-called ‘swage-line’ curves upwards towards the rear wheel arches.

The front end features hints of the RX-8, especially noticeable in the front wings. In general, the front view is one of clean, tidy lines with a gently curved bonnet and integrated front bumper. The same can also be said of the rear end, where there isn’t even a tailgate lock to spoil the view as it has been replaced by a small micro switch.

The idea was to make the car look as smooth as possible and in doing so reduce drag. Streamlining was one of the areas that Mazda took very seriously with underbody covers beneath the engine bay, aerodynamic bumpers, A-pillars and mirrors. The washer nozzles are hidden, too.

Better aerodynamics means better fuel consumption figures and reduced CO2 emissions. In the case of the Mazda2, these improvements were aided by making the car lighter. Now, most manufacturers are doing this to make their cars meaner and greener but I’m not sure that they go to the same lengths.