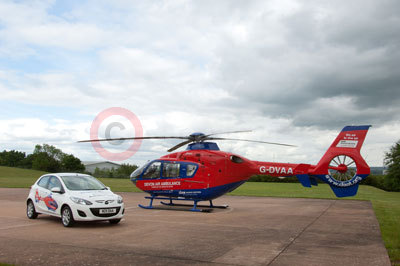 Vospers Mazda Exeter and Mazda UK have helped to raise more than £55,000 for the Devon Air Ambulance Trust (DAAT) by contributing towards the cost of a Mazda2 1.3 petrol TS2 hatchback, worth £11,900 as the first prize in the charity's 2011 Grand Summer Draw.

Across Devon thousands of people bought £1 raffle tickets for the Grand Summer Draw, to support the vital work of the DAAT.  The winner was drawn on Broadsands Beach during the annual Agatha Christie Festival.

The proud owner of the new Mazda2 is Mrs Ann Cole, whose mother purchased the winning ticket. When Mrs Cole collected her Mazda2 from Vospers Mazda, she said, "Ever since my father was airlifted by the Devon Air Ambulance after he collapsed, my mother and I supported the Trust as much as possible.  Naturally, when we purchased the tickets neither of us expected to win.  My mother was delighted to have won and I'm glad that I can enjoy driving the car on her behalf."

Alex Bass, Dealer Principal for Vospers Mazda Exeter commented, "We are extremely proud to have supported the Devon Air Ambulance Trust's Grand Summer Draw for the fourth year running.  We've had a great time meeting Devon's thousands of DAAT supporters and Mazda fans over the last couple of months.

"Everyone who purchased raffle tickets for the competition deserved to the win the car, but we are particularly pleased the car has gone to such a worthy winner, who has experienced the good work of the DAAT first hand."

Caroline Creer, Fundraising Director of Devon Air Ambulance Trust added, "We would like to thank Vospers Mazda and Mazda UK for their continued support, which has made a big difference to our fundraising.  They have helped us generate over £175,000 through the Grand Summer Draw in the last four years and the 2011 competition was better than ever, raising over £5,000 more than last year.