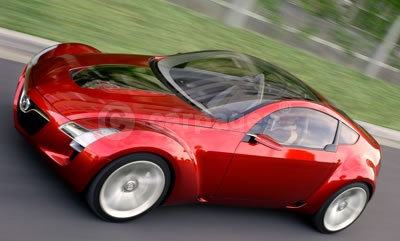 Mazda is a young, nimble company that allows designers to get close to their visions, said 37-year-old Franz von Holzhausen, the new Director of Design, Mazda North American Operations.

“With GM there are tons of layers to get through to get to the top and as a designer you don’t want your ideas diluted; you never get a pure result, but at Mazda it gets close.”

At GM, Franz was responsible for designs which included the Solstice sports car, one of the big hits of the 2004 North American International Auto Show.

There’s a sense of empowerment working at Mazda which is missing from a larger company, he said at the 2006 NAIAS. “There is an energy here that just doesn’t exist at GM. Mazda is a more comfortable fit for me and my personality.”

This year, Franz’s signature is firmly on the Mazda Kabura concept, one of the stars of the show.

He sees his job as giving a voice to Mazda’s presence in North America. “We don’t want to lose our Japanese influence but in terms of powertrain and the touch and feel of a vehicle we need to make the most of our opportunities here,” said Franz who is based at Mazda’s Irvine, California, studio.

The Kabura is a sports coupe designed for the US market and would fit into the Mazda sports car range beneath the MX-5, he said.

“It has the soul of a sports car and it looks richer and more expensive than it is,” said Franz, a self-confessed sports car enthusiast.

It also emphasises what is important to today’s younger buyers, so it sticks with a traditional sports car front engine-rear wheel drive layout. But the interior is radical with a 3+1 seating arrangement. Two passengers sit alongside the driver in tandem and there is a fourth, occasional seat behind the driver.

This is because Mazda’s research showed that younger drivers rarely carry more than two passengers.

“It’s better than a 2+2 arrangement and it’s allowed room for a fuel cell under the +1 seat to give more room yet doesn’t give up anything” said Franz.

Kabura is a showcase for Mazda’s North American design direction and a test bed for ideas. “There is a sense of reality to it, but it is a pure concept,” said the design chief.