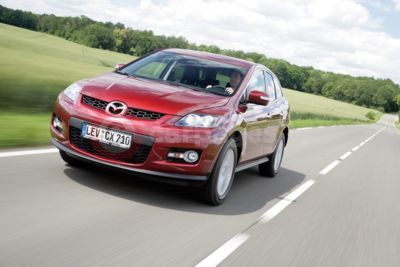 Following its successful launch in both North America and Japan, where more than 46,000 units have been sold, MRE assessed and then tuned the Mazda CX-7 in Europe for driving performance and craftsmanship.

In fact, around 30 per cent of the European Mazda CX-7 set‑up is different to other global versions.  These improvements for the European market include tuning to handling, ride comfort, suspension settings, steering, brakes, ABS, ESP and NVH for powertrain, road noise and window noise.

Alongside Mazda's European design studio the R & D Centre also has a dedicated team which ensures every model complies with European specifications, regulations, market needs and tastes.  For the Mazda CX-7, an engineering team of 15 took the US version as their basis and developed the different specifications needed to match European customer tastes.

This began by benchmarking the best of the European competition on European roads. Together with suppliers and Mazda Japan, the team worked hard to deliver a driving feel that takes a more sporty direction by testing the European CX-7 on Nürburgring’s Nordschleife, mountain roads, on German autobahns at high speed as well as winter testing in Northern Europe.

This included powertrain testing of the Mazda CX-7’s high-performance 2.3‑litre DISI turbo petrol engine, which produces 191 kW/260 PS of output (the US version produces 244 hp) and 380 Nm of torque – the same as Mazda’s high-performance MPS engine. This powerful turbo engine was then mated to a specially-developed six-speed manual transmission. Top speed tests were conducted on Germany’s autobahns, along with maximum speed limiter control and high-speed acceleration.

In addition, intensive chassis testing was conducted at Nürburgring’s “green hell” (the Nordschleife) because the European market has unique requirements for high speed stability. The first step was to concentrate on overall body rigidity with reinforcements on different parts of the chassis. The front cross members and the ones placed on the transmission tunnel were made thicker, as were the front suspension towers.

For European drivers, the feeling of being connected to the road and the quality of road feedback is crucial. To deliver this, the suspension of the CX-7 was reworked. For example, the pull bars linking the rear suspension to the body adopts a different layout and suspension settings were redefined to find an ideal compromise between agility and drive comfort. The tyres, steering characteristics and ESP settings are all different as well.

With these enhancements, combined with SUV roominess and flexibility, the Mazda CX-7 is poised to set a new standard in its segment in Europe. Demanding, sporty and different, it gives European customers everything they could ever want to support a multi‑activity lifestyle with high levels of driving enjoyment.

CX-7 Images may not be UK specification cars. Colours and exterior and/or interior elements may differ from actual models.