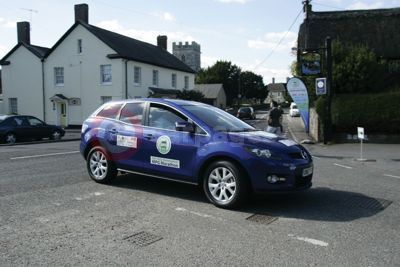 After completing 330 miles on the gruelling AA/ALD Automotive mpg Marathon 2007 over the roads of south-west England, Mazda Motors UK has claimed not only pole position – with the greatest percentage improvement ever attained over the official ‘combined’ fuel economy figure – but also second place overall with its latest Mazda CX-7 model.

From a field of 35 entrants representing a cross-section of eco-friendly hybrids, economical city-cars, hot-hatchbacks and other family models, the performance of motoring journalist Sue Cooke (co-driven by her 19-year old daughter Joanne), was no less than extraordinary.  Driving a 260ps Mazda3 MPS super-hatch, the Cookes were delighted to record 43.34 mpg.

Sue stated, “Because I have never regarded my driving style as being expertly economical, I avoided some of the typical ploys of economy drivers, whom I understand ‘coast’ as often as possible to improve their vehicle’s fuel economy, and preferred to stick to a more realistic approach.  That we produced a result, which shows a remarkable 48.95 per cent improvement over the official government figure, (Mazda’s best-ever result) demonstrates the outstanding integrity and efficiency of Mazda engineering.”

Mazda had entered a two-car team in this year’s testing mpg Marathon event, with the latest Mazda CX-7 Sports Crossover for Iain Robertson, motoring journalist and twice previous winner in a Mazda6 2.0i and Mazda6 MPS.  He was co-driven by Jerry Ramsdale.

Iain described the event as, “one of the most exciting I have undertaken for many years!  Naturally, I am delighted for Sue and her daughter, however, Mazda should feel proud of the 38.35 per cent improvement and 38.32mpg achieved by the CX-7.  Considering perceptions of this car as a sporting SUV, these figures are no less than outstanding.”

The route commenced at the AA’s motoring organisation headquarters in Basingstoke, travelling on a mix of motorways and A-roads to Torquay for the overnight halt.  Restarting the next morning, the route finished with a return leg to the AA HQ, where the legal measurements and tank-refilling exercise took place and the results were announced.

Mazda’s history in this event includes a recent hat-trick, with success for the manufacturer’s models in three of the past three years.  This unprecedented performance provides ample proof that Mazda’s attention to mechanical detail and high quality engineering standards can help drivers to address their carbon footprints with the utmost efficiency.

Economy, marathon and World Record driver, Iain Robertson, explained: “If all drivers were able to reduce their annual fuel consumptions by just 10 per cent, the ecological impact of the motorcar would be significantly reduced.  That both of our Mazda models produced such startling improvements over the official figures, highlights that most drivers should be able to improve their economy and take pride in the achievement.  However, before people think that driving economically means only driving slowly, they should consider that forward planning and driving progressively are the actual keys to success.”

CX-7 Images may not be UK specification cars. Colours and exterior and/or interior elements may differ from actual models.