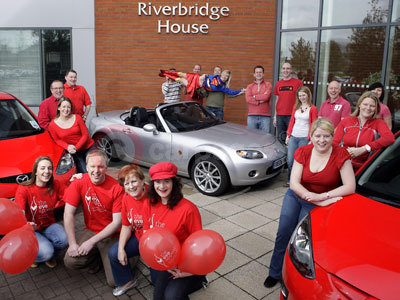 Employees of Mazda UK based on Crossways Industrial Estate in Dartford, Kent, raised over £400 for Ovarian Cancer Awareness on Friday by hosting a 'Wear it Red' Dress Down Day and holding a Make time for TEA party in aid of The Eve Appeal charity, which funds groundbreaking research into gynaecological cancers.

Jeremy Thomson added: "The Dress Down Day for The Eve Appeal was an excellent opportunity for Mazda staff to celebrate the recent success of our best-ever start to a year over a cup of tea and slice of cake.

"Mazda further strengthened its position in the shrinking UK market by making a record-breaking start to 2009 with our best-ever passenger car market share for January and February combined at 2.7 per cent. In fact, strong demand for models across Mazda's range resulted in the brand's highest-ever share of the retail market, at 3.4 per cent during January and February."

The Eve Appeal was first introduced to Mazda through motor industry charity WOMAC (Women On the Move Against Cancer), which has pledged to raise £20,000 to sponsor a PhD student for a year.

Jeremy Thomson, managing director for Mazda UK said: "We were really pleased to support The Eve Appeal to help raise Ovarian Cancer awareness among Mazda employees and contribute to the much-needed funds for vital ongoing research work that the PhD students put into ovarian cancers."

Mazda's Charity Committee, made up of four members of staff, put together the 'Touch of Red' event as a fun day for employees by inviting everyone to wear something red for the day and hosting a Make time for TEA party with home-made cakes and green tea. Evidence from a study by Karolinska Institute in Stockholm, Sweden indicated that women who drink two cups or more of black or green tea a day had a 46 per cent lower risk of ovarian cancer compared with women who were non-tea drinkers.

Mazda UK's PR Manager and WOMAC Patron, Samantha Williams added: "The Mazda brand is all about being engaging, dynamic and fun and the theme of a 'Touch of Red' helped us to emphasise the importance of recognising the signs of Ovarian Cancer and raising money for further research in an engaging way to Mazda staff. This was helped by the appearance of 'Supergirl' who sold The Eve Appeal merchandise and raffle tickets."

The Eve Appeal charity is asking women, at home or at work, to take part in the 'Touch of Red' campaign which will help raise funds for ovarian cancer research and boost awareness of the disease by hosting Make time for TEA parties.