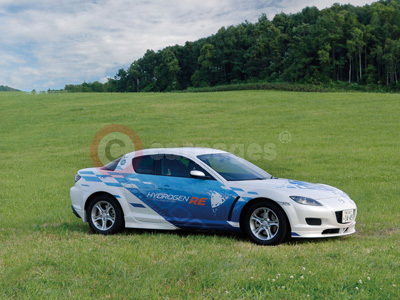 Mazda Motor Corporation is celebrating its 90th anniversary this year, following nine successful decades in which Mazda's innovative spirit and willingness to try new things, has led to the creation of some remarkable automotive technologies benefitting millions of motorists. One of Mazda's most popular innovations has been the incredibly smooth rotary engine that in its latest 'RENESIS' form, generating 231ps, that powered the unique four-door coupe Mazda RX-8 sportscar.

Today's Mazda rotary engine has a fascinating history. Invented by the engineering 'dreamer' German Felix Wankel, the rotary engine which carried his name so impressed Mazda's Kenichi Yamamoto that Mazda bought the patent in 1961. The first 'Wankel' engine delivered to Hiroshima suffered many problems that the genius Yamamoto-San and his engineers cured.

In its first production version (the 1967 Cosmo Sport) the Mazda dual-rotor engine had trochoidal housings holding triangular-shaped rotor-discs with the eccentric shaft running through the middle. It was a smooth and high-revving engine because the pressure it produced turned the eccentric shaft directly, and did not need to be converted to a spinning motion by connecting rods as is necessary in a conventional piston engine. This rotary technology would go on to power nearly two million Mazda road cars and the Mazda 787B racecar that won the Le Mans 24 Hours in 1991.

Hydrogen and the Rotary Engine

When Mazda engineers first tried hydrogen-fuel in their rotary engine in 1990, it quickly became apparent that rotary technology had several advantages over piston engines using the same fuel. The hydrogen/air mix in a rotary engine is more thorough and stronger as the intake process can take longer and there are no intake and exhaust valves to heat up. Over the last 20 years, Mazda has developed its hydrogen rotary engine to production status, and a fleet of 'long-term test vehicles' (Mazda RX-8 Hydrogen RE and the Mazda5 Hydrogen RE Hybrid) which is currently being leased to customers in Japan and Europe.

A fuel-saving technology that is now available to all buyers of the Mazda3 is Mazda's unique i-Stop system. Mazda engineers were determined to achieve the fastest possible re-start for their system which idles the engine whenever the car stops. They knew that if they could stop a petrol engine with the compression and expansion-stroke pistons in the right position, they could initiate a rapid restart by igniting fuel in them. But to do this, fuel had to be injected directly into the cylinder. This was the birth of Mazda's innovative direct-injection petrol + i-Stop technology. When the driver pushes the clutch pedal to engage first gear, the engine restarts smoothly in just 0.35 seconds - about twice as fast as conventional systems.

Conventional catalysts have large amounts of precious metals embedded onto their ceramic surfaces to react with exhaust gases and 'catalyze' their toxins. Several years ago, Mazda engineers used single nano-technology to successfully embed precious metal particles individually onto a ceramic base, avoiding the 'clumping' problems of the old technology and achieving a 70 per cent saving in the precious metals required, with no drop-off in performance. For its diesel engines, Mazda made a particulate filter (DPF) with a ceramic base structure that allows the oxygen molecules embedded in it to release when burning off diesel particulate matter. This improves DPF efficiency, requires less fuel, and reduces the need for filter regeneration.

For any vehicle, weight gain kills performance, diminishes agility and increases fuel consumption. Driven by the ambition to build ever more efficient cars that are still fun-to-drive, Mazda introduced its 'gram strategy' to lower vehicle weight by scrutinising every component at the initial design stage to indentify and implement possible weight savings.

Furthering the more strength with less weight ethos, ultra-high tensile steels for a stronger and lighter body and suspension were produced with advanced casting technologies. Engineers even introduced lighter neodymium magnets for the audio speakers. By going back to the basics, Mazda became one of the first carmakers to introduce a new generation of cars that were lighter, stronger, more fuel-efficient and cleaner than their predecessors - despite the fitting of additional safety technologies and more infotainment equipment as standard.