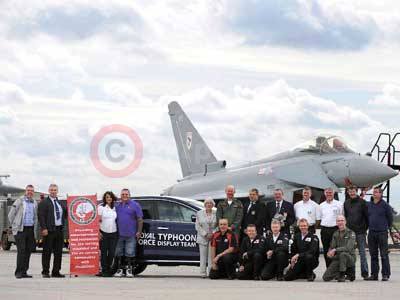 Armed Forces Veterans From The Not Forgotten Association

The Not Forgotten Association supported armed forces veterans as they had a VIP visit at Royal Air Force Coningsby as part of the support provided by the Typhoon Display Team and Mazda UK.

Mazda and the Typhoon Display Team are hosting beneficiaries on fun days out at air shows and events throughout the year, helping to promote the tri-service charity whose aims are to provide activities that bring happiness to injured serving and ex-service personnel with disabilities.

Wing Commander Al Seymour, Officer Commanding 29 (Reserve) Squadron, in charge of the Typhoon Display Team, who hosted the VIP day at RAF Coningsby, commented: "We are delighted to host The Not Forgotten Association today and we are grateful to Mazda, the display team sponsor this year, for their help in making the day happen. It has been a privilege to have been able to showcase the present and future of the RAF in the form of the Typhoon, to some inspirational representatives of the recent past of the armed forces."

Visitors were provided with the chance to get up close to the Typhoon with a guided tour and an opportunity to have a photograph taken with the Vulcan, which was at the base temporarily. The veterans VIP day also included a tour of the RAF Battle of Britain Memorial Flight by a fast jet pilot who explained the differences between flying the Spitfire and a jet such as the Typhoon.

Wing Commander (Retired), Rosemary Partington, Official Volunteer representing The Not Forgotten Association added: "We have had a very interesting day here and we have been looked after extremely well. It was a real honour to meet Wing Commander Seymour and the Typhoon Display Team as well as Mazda who have been tremendous ambassadors for our charity this summer at various events."

Comments from The Not Forgotten Association's guests on the visit included: "We have had a great day. It's terrific to be back on a military base, to feel involved with the military again. This year there has been a number of events, courtesy of support from the display team and Mazda; they have done a great job in promoting the charity to the service community and the general public." Andy Phillips (RAF and 1991 Gulf Conflict veteran)

"Not only have I had a great time, but it really does make you feel that you are Not Forgotten." Philip McAlister (Royal Navy veteran)