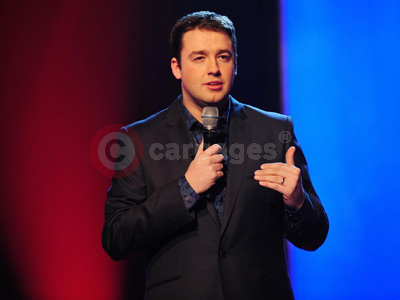 The six week series hosted by award-winning comedian Jason Manford is produced by ITV Studios for ITV1 and goes out on Friday nights at 9pm, 'Comedy Rocks with Jason Manford' will feature some of the best new names from the comedy circuit along with some of today's hottest musicians and entertainers.

The package negotiated by ITV Commercial and Mindshare on behalf of Mazda, includes broadcast, online, and mobile sponsorship.

ITV Commercial said: "Comedy Rocks with Jason Manford is a new peak time entertainment series for ITV1 featuring some fantastic faces from the Comedy and Music circuit. We are delighted to have Mazda on board as the sponsor again, building on their previous sponsorship of 71 Degrees North in Autumn 2010."

The sponsorship idents were produced by the Outfit and will feature the strapline: "Have it all, with the Mazda2. Sponsors of Comedy Rocks with Jason Manford". The analogy behind the idents features the Mazda2 as the star of the show and the characters in the idents representing different performers that will appear on the show such as a rock chick, guitarist and comedian.

'Comedy Rocks with Jason Manford' has it all, both music AND comedy acts both in one show. You can also 'have it all' with the Mazda2 which includes up to three years complimentary servicing, VAT fixed at 2010 rate, low deposit and monthly payments combined with great-looking sports styling with dynamic and agile driving features.

"The audience profile of the ITV sponsorship programme is a perfect fit with the Mazda2 target customer, which is aged between 25-44 and a mixture of male and female buyers. These viewers are people who are switched on to engaging content such as comedy and music," comments Claire Andrews, Marketing Director for Mazda UK.

Andrews added: "Comedy Rocks with Jason Manford perfectly complements the Mazda2 and its spirited and fun persona which is reflected in the shows content with comedy and music acts from artists such as Al Murray and The Script."

The upgraded Mazda2 line-up, features a nine-strong model range with three-door and five-door hatchback body styles and an automatic transmission. Available in a choice of three petrol and one diesel powertrains and four generous equipment levels (TS Air Con, TS2, Tamura and Sport).

A new 'Have it All' campaign offering up to three years complimentary servicing, VAT fixed at 2010 rate and customer savings on selected models. Customers purchasing an upgraded Mazda2 Tamura or Takuya on Mazda Personal Contract Purchase can have up to the first three services compliments of Mazda, included in the OTR price depending on which PCP finance term is taken, 24 or 36 months.