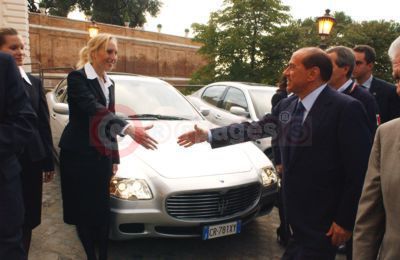 For the first time since the Treaty of Rome was signed in 1957, Italy hosts the Heads of State from the 25 countries of the European Union together with representatives from four other countries that are interested in becoming part of the EU.

On Friday 29 October at 12 noon, the political delegations from each country will meet in Campidoglio to sign the European Constitution, in the Orazi and Curiazi room, the same where the Treaty of Rome was signed.

Maserati has provided 15 Quattroportes to chauffeur the Heads of State, Prime Ministers and Ministers for Foreign Affairs whilst in Rome.

More than 1500 international media are covering the event which will be broadcast live by more than 100 TV stations worldwide, and TV coverage is being orchestrated by feature film director Franco Zeffirelli.

Rehearsals for the event took place yesterday in the presence of Italy’s Prime Minister Silvio Berlusconi and Mayor of Rome Walter Veltroni, with the 15 Quattroportes prominently placed in front of the Campidoglio.

Maserati’s CEO Martin Leach commented: "The fact that the Quattroporte has been chosen for an event of such historic importance, represents an International achievement for this car, which goes side by side with its international commercial success".

This is a 16-year+ news article, from our Maserati archive, which dates back to the year 2000.

If in doubt check with your local Maserati dealer as car prices and technical data will have changed since 2004.