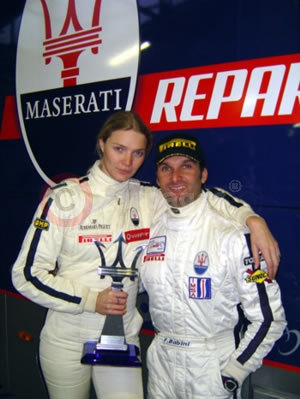 Jodie Kidd claimed second place in Bologna, Italy on Saturday, 3 December. The English Supermodel, together with FIA GT driver and Pirelli official tester Fabio Babini, stepped up to the second spot on the podium in the Trofeo Maserati race on board the Toora VIP car at the Bologna Motorshow.

Jodie and co-driver Fabio, who had been the fastest crew in the morning semifinals, finished second by a mere 0.7s, behind Trofeo driver Andrea De Megni and Paris-Dakar driver Alessandra Merluzzi. Third came Italian motorsport rising stars Matteo Gamba and Simona De Silvestro, who were awarded a drive in the Trofeo race in Bologna by Italian Motorsport Association CSAI for their sporting achievements. Autosprint journalists Dario Marchetti and Alexandra Gallo came home fourth.

Four special guests were supporting Jodie and Fabio at the Motorshow race: Paul and Jane Barry-Walsh, together with daughter Olivia and son Ed, were the winning bidders of BBC’s Children in Need charity auction which took place earlier this year.

The prize, which was donated by Jodie Kidd, UK’s leading private jet operators Club 328 and Maserati consisted of a return flight on a luxury private jet, accommodation, entry to the Bologna Motorshow and access to the Trofeo Maserati paddock area.

Maserati Trofeo Images may not be UK specification cars. Colours and exterior and/or interior elements may differ from actual models.