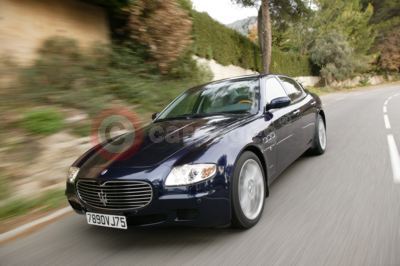 Maserati looks back on a year of great achievements, with over 7000 vehicles delivered, mainly thanks to its flagship the Quattroporte, on show in Detroit in a super-deluxe limited edition. In the meantime, with orders totaling 2333 in just six months, the Maserati GranTurismo is still firing the public’s imagination.

From production through to sales, Maserati’s figures for 2007 speak for themselves: a production record was set in October, when 850 vehicles left the Modenese plant - equivalent to the annual production of just a few years ago - while December ended with a record of over 1000 vehicle registrations.

Throughout 2007, 7353 cars were delivered to customers, 33.3% more than the previous year, through a network of 272 dealers in 59 countries on 5 continents: the US market was in first place, with 2600 vehicles delivered in 2007, 20.5% more than the preceding year, followed by Italy with 714 vehicles, a 40% increase compared to 2006. In third place was the United Kingdom (611), whose close rivals throughout the year were Germany and Japan. These markets were followed by Switzerland, France, China (eighth place), The United Arab Emirates and Australia.

2007 was also a hugely satisfying year in financial terms. Pending the arrival of the official figures from the Fiat Group, expected at the end of the month, we can look back on the exciting results recorded during the third quarter, when the company earned revenues of € 141 million, up by 33% compared to the same period in 2006. Total revenues during the first 9 months amounted to € 485 million, an increase of 29.3% and profits of € 6 million from ordinary operations - the exact opposite of the result for the previous 12 months, in which € 6 million was the loss that was recorded. Looking at the period from January to September, the comparison is even more pronounced: € 6 million profit in 2007, compared to a € 32 million loss in 2006.

These commercial and financial successes are mainly due to the Quattroporte model, restyled for the last Detroit Motor Show with the introduction of an automatic transmission, in addition to the Duo Select. Winner of 40 international awards, approximately 15,000 have been delivered since its launch.

Of all the Quattroporte delivered in 2007, 74% were automatic models and the remainder were Duo Select, in the following versions: Executive GT, Sport GT and Sport GT S, launched at the Frankfurt Motor Show with only an automatic transmission.

A closer analysis of the figures for the period from January to September 2007 in the eight largest international car markets in Europe (Italy, Great Britain, Germany, France, and Switzerland), and the USA, Japan, and Australia, reveals that the Quattroporte is the fourth most popular car in its category (on average), and the second-highest seller in the five European countries. The best performances were achieved in Italy and France, where the Quattroporte is top of its segment, while in Switzerland and Australia it is second.

This is a 12-year+ news article, from our Maserati archive, which dates back to the year 2000.

If in doubt check with your local Maserati dealer as car prices and technical data will have changed since 2008.