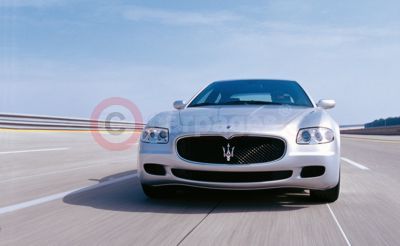 Recognised as a star in its class, the Maserati Quattroporte also maintains its residual value for a long time after purchase - a study in Italy reveals.

The Maserati Quattroporte enjoyed extraordinary success in 2005, playing a starring role in Maserati’s significant worldwide growth (+ 25 %) and the spectacular + 54 % increase in the United States. The beginning of 2006 promises more of the same and even more glory in the form of five international awards: Maserati’s four-door saloon is still considered to be a class apart.

The best known German motoring magazine, Auto Motor und Sport, judged the Quattroporte to be the 'Best Car of 2006'. The Maserati Quattroporte secured the trophy for the best import car in the Luxury Saloon category with 36% of the vote. This figure was 20% higher than that of its closest adversary. The Quattroporte's typically Italian styling, its elegance and refined 'made to measure' finish were highlighted as reasons for the choice. The car triumphed over its rivals in a survey of 100,000 readers as it took the prize awarded by one of the most prestigious publications in German motoring. The awards ceremony was held in Stuttgart in the presence of Maserati's CEO, Karl Heinz Kalbfell. The Quattroporte was also awarded the first prize in the luxury saloon category by the Dutch edition of Auto Motor und Sport magazine.

In Italy, the monthly magazine Quattroruote, celebrating this month its 50th anniversary, awarded the Quattroporte yet another prize. The magazine's readers judged the vehicle to be 'The car I prefer 2006'. The Maserati Quattroporte claimed the prestigious award in the 'Flagship' class for the third consecutive year, gathering 42% of the vote - more than twice that of its closest competitor.

Important recognition also came from France and the respected Automobile Magazine. In its January issue, the publication elected the Quattroporte the 'Best Car' in the luxury saloon category. As Stephane Meunier, editor of the French monthly, pointed out, the Maserati flagship model is the only car to have received this award three consecutive times - a clear testimony to how much the Quattroporte is valued by the French public.

Finally, the Quattroporte was voted the 'Best Car 2006' in the Luxury class by the Swiss magazine Auto Illustrierte. For the second time in a row the Quattroporte took the prize, attracting 25% of the votes polled - almost 10% more than its nearest rival.

Since its international launch in September 2003, the Maserati Quattroporte has received a total of 27 international awards, including the prestigious Wallpaper Design Award in 2004 and Top Gear’s "Best Limo of the Year" in 2005.

But the Quattroporte does not only collect first-in-class awards by readers spread all over Europe. A new survey on the Italian market conducted by Sanguinetti Editore, publishing company of the widely respected Eurotax, found that the Quattroporte is an excellent form of investment and the highest rated car, after the Ferrari F430, to hold its value in the G luxury sector. The Maserati Quattroporte depreciated slower compared to the other models in its category. Pininfarina's masterpiece, like a fine work of art, never loses its value.

This is a 14-year+ news article, from our Maserati archive, which dates back to the year 2000.

If in doubt check with your local Maserati dealer as car prices and technical data will have changed since 2006.