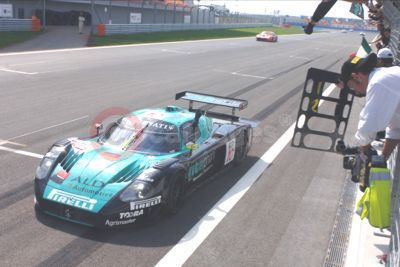 Thanks to a sparkling one, two, three secured by Bartels/Scheider (Vitaphone), Babini/Biagi (Vitaphone) and Bertolini/Wendlinger (JMB) in the eighth round of the FIA GT championship held today at Istanbul, Maserati has made mathematically certain of the FIA GT1 Manufacturers’ Cup.

The Trident Marque is now on 196 points in the standings reserved to GT1 class constructors. Ferrari are the closest challengers on 90. In the team classification, a Vitaphone Racing Team double gives them a 22 point lead over JMB Racing (110 to 87); both teams race in Maserati MC12s. In the drivers' championship, Maserati occupies the top three positions: Bertolini/Wendlinger lead with 63 points, followed by Bartels/Scheider (56) and Babini/Biagi (54).

The race was a tight one right from the start. Babini was in amongst it and got off to a good start to take the lead, profiting from the turn 1 traffic. Bertolini was nudged by a Lister and went into a spin. His tyres were affected and he slipped down to fourteenth spot. Scheider, down in sixth after a difficult start, soon caught and overtook Hazeman’s Corvette on lap nine.

The German set off after Babini who had, in the meantime, built a healthy lead over his pursuers.

The two Vitaphone MC12s were able to stretch into a lead over the group but an accident involving the number 4 Saleen on lap 14 meant that the safety car was called for.

Its entry created a lot of confusion. Babini and Biagi were the two penalised most as they fell to ninth position. Bertolini had given up the driving seat to Wendlinger in third spot. Almost all the competitors took the opportunity to make their tyre changes, refuel and switch drivers. The race restarted on lap 21 with Gardel in the lead. Behind him came Bartels, Longin and Wendlinger. Bartels edged past the Ferrari man and moved into the lead. A little further back Wendlinger made second spot his own, just ahead of Biagi who was storming up the field. The driver from Emilia executed a splendid overtaking move on Wendlinger to sweep into second place. Even Can Artam, Philipp Peter’s replacement, was lapping quickly and took fourth from the Corvette.

With four Maseratis filling the top four places, nothing changed until the final stops when Scheider substituted Bartels, Babini replaced Biagi, and Pillon took Artam’s drive. Artam had even held the lead for four laps. Scheider chose not to change his tyres, as the other drivers had done, but the German only had to cruise on a 12 second cushion until the chequered flag.

Bartels/Scheider thus earned their second win of the season following the triumph at the 24 Hours of Spa. They headed their team mates, the brilliant Babini/Biagi (10"960 down). Next came Bertolini/Wendlinger (26"987 down). Peter/Artam/Pillon, 1 lap down, were penalised 30" for overtaking when the yellow flag was being flown. The race’s fastest lap was clocked by Fabio Babini: 1'50"949.

Claudio Berro: "An all-Maserati podium is great. It is even better having made the FIA GT1 Constructors’ Cup mathematically secure. It was mission accomplished for Maserati and teams Vitaphone and JMB who race the MC12. A special thanks go to those who have made Maserati’s return to racing possible. I would like to say thank you to Luca di Montezemolo, Mr Todt, the Maserati president Marchionne, Karl-Heinz Kalbfell, without forgetting the chief executives who came before him, Antonello Perricone and Martin Leach. I would also like to thank Pirelli for the great support they have given throughout the season."

Timo Scheider: "The start was a confused one and, unfortunately, I ended up on the dirty part of the track and lost a lot of places. However, this meant that the race was an eventful one. I had to make a comeback and overtake a lot. The car handled very well during the race even if the final phase was quite difficult, since I chose not to change tyres. This choice, though, led to the win. I would like to thank Vitaphone, Maserati and Pirelli for today’s fine result."

Maserati MC12 Images may not be UK specification cars. Colours and exterior and/or interior elements may differ from actual models.