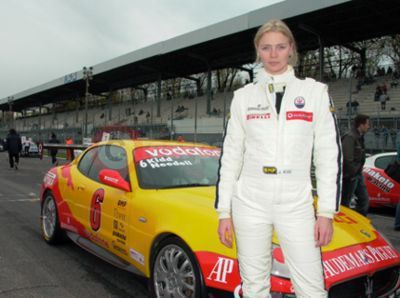 Maserati took the lead in the FIA GT Constructors’ Championship after a tough, gripping race in Monza, Italy with four MC12s finishing in the top five.

Despite some problems during a pitstop, the Vitaphone team managed to score second and third place with Bartels/Scheider and Babini/Biagi respectively. The race was won by the Ferrari 550 Maranello fielded by the Larbre team and driven by Lamy and Gardel.

The two MC12s from JMB earned 4th and 5th with Buncombe/Peter/Rusinov and Bertolini/ Wendlinger.

In the Trofeo Vodafone Maserati race, supporting the first round of the FIA GT Championship in Monza over the weekend, UK drivers shone and conquered first and third step of the podium.

Twenty-three year old British rookie Alex Buncombe, whose older brother Chris races a Maserati MC12 for JMB in the FIA GT Championship, took the lead after the compulsory pit-stop and never let it go. Second in the race was Italian Alberto Cerrai, at his second season in the Trofeo, while Moz Fabris, another UK driver, came third. Notter/Cattori, Rob Wilson and Joe Macari completed the top six.

TV presenter and ex-Formula 1 driver Tiff Needell and supermodel Jodie Kidd came 16th in the VIP Pirelli car. Tiff was the first of a line up of experienced racers who will be partnering Jodie as she contests the full 2005 season. "The Trofeo Championship," Tiff said, "is a great one-make series that matches different talents: it’s a fantastic opportunity for anyone, from the young, ambitious GT racer to the more mature enthusiastic amateur. It’s very well organised and great fun!"

The next round of the Trofeo Vodafone Maserati will take place in Barcelona, supporting the Formula 1 Grand Prix, on 6-8 May.

Maserati MC12 Images may not be UK specification cars. Colours and exterior and/or interior elements may differ from actual models.