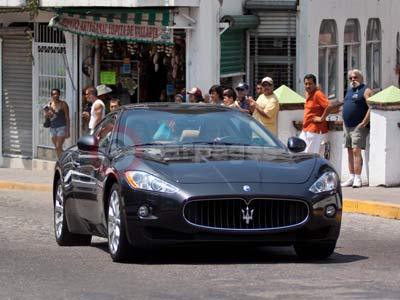 Maserati GranTurismo During Filming of Limitless

Limitless is a thriller which tells the tale of a 'magic' pill which is able to enhance the powers of the mind, and stars Robert De Niro and Bradley Cooper. Also staring in the film is a Maserati GranTurismo in Grigio Granito with Avorio interiors.

Universal Studios and Relativity Media were looking to cast a car that boasted style, class and breathtaking performance. The maserati GranTurismo ticked all the boxes.

Bradley Cooper said "Oh. Yeah. There's just one shot in the film where I didn't drive it. The rest, I was driving. The thing about the Maserati is, it's a beautiful car ... But it's also the perfect mix of luxury and sport."

This is not the first time that a Maserati has made a screen appearance: in fifty years of cinema, actors of the calibre of Alberto Sordi, Vittorio Gassman, Donald Sutherland, David Niven, Peter Sellers and Alain Delon have all climbed behind the wheel of a Maserati.

Producer Jerry Weintraub chose the Maserati Quattroporte to star in 'Ocean's Thirteen', the follow up to the film 'Ocean's Twelve'. Maserati's flagship model also played a central role in the second season of TV series 'Entourage' and the 2008 movie 'Max Payne' directed by John Moore and starring Mark Wahlberg. In 2003, in 'Charlie's Angels II', a Maserati Spyder Cambiocorsa driven by Robert Patrick was the car of choice for accompanying Demi Moore, Cameron Diaz, Drew Barrymore and Lucy Liu. Eva Longoria also had a Spyder which was driven down Wisteria Lane in season one of 'Desperate Housewives'.

This is a 9-year+ news article, from our Maserati archive, which dates back to the year 2000.

If in doubt check with your local Maserati dealer as car prices and technical data will have changed since 2011.

Maserati GranTurismo Images may not be UK specification cars. Colours and exterior and/or interior elements may differ from actual models.