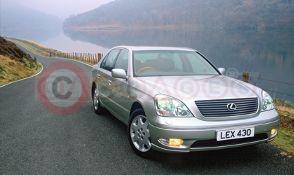 Warren Pierson was the luckiest man at the British International Motor Show today as he came to collect a new Lexus LS430 after winning the £50,000 car in the Top Trumps promotion that ran at Shell Service Stations.

Running between July 4 and September 4, the promotion - organised in association with the SMMT - gave customers of Shell's Optimax fuel the opportunity to collect Top Trumps cards and win the prize of a £50,000 car of their choice.

After receiving the keys on the Lexus stand from David Moss, Shell Retail Operations manager, Pierson joked: “Winning the car hasn't sunk in yet. If you give me the keys I think I'll just roll it right off the stand. I'll now have to look at some of the stands at the show for motor insurance.”

It had been a difficult decision for Pierson and his wife Alison, from Purley in Surrey, picking the car. “It was a challenge so I bought What Car? magazine and then test drove the Jaguar XK8, but after having the Lexus for a weekend, it won on luxury and gadgets - it was very impressive,” he said.

Moss said the promotion was designed to reward the company's loyal Optimax customers and to encourage more people to try the new unleaded fuel and 'feel the difference'.

After receiving his prize Pierson joined the Ferrari Pit Crew on the Optimax stand where they are displaying their skills at tyre changes on two Ferrari F1 cars throughout the show.

This is a 19-year+ news article, from our Lexus archive, which dates back to the year 2000.

If in doubt check with your local Lexus dealer as car prices and technical data will have changed since 2002.